Care Controversy: “[Change] will take political will and a lot of creativity” 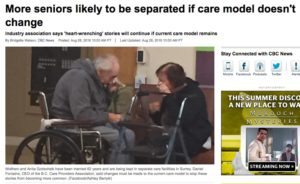 Controversy erupted after a Metro Vancouver granddaughter of 2 seniors – who have been married for 62 years – posted on Facebook an account of how the 2 were kept in separate seniors care facilities, potentially exacerbating the health concerns of both and increasing their unhappiness. This story and the potent image of the pair weeping in a hallway broke into an international news sensation, with news organizations such as BBC and the Washington Post — as well as dozens of others picking up the story. Other similar stories have begun to be reported as well.

Late last week media calls started coming in to the offices of BC Care Providers Association, and a series of interviews with BCCPA CEO Daniel Fontaine followed. In a conversation with the high profile CBC On the Coast radio program and host Gloria Macarenko, Fontaine responded that a solution is within grasp so that this kind of incident is not repeated. Some of that conversation is captured in a report covered by CBC News. 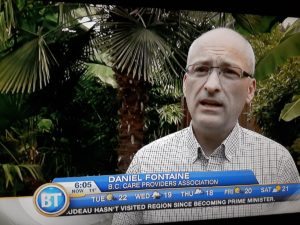 Fontaine also explained that the MyCareFinder.ca tool – launched last spring – was an important new piece to the puzzle to help people to find the care they need. He was also able to mention the forthcoming industry collaborative happening on September 20th at the Wosk Centre, where industry leaders will gather to discuss solutions to challenges like these.

To listen to the full broadcast of the CBC Radio interview, visit this link. 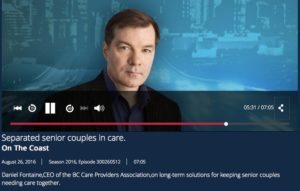 Senior couples forced to live apart because of their care needs could become increasingly commonplace if changes are not made to the province’s care model, an industry association CEO says.

The story of a couple married 62 years and kept in separate Surrey care facilities drew attention to the issue earlier this week.

Daniel Fontaine, CEO of the B.C. Care Providers Association, said creating care campuses that offer varying levels of services, and reallocating funding, could be the key to keeping loved ones together.

“We haven’t got a model where there are a sufficient number of care campuses that offer a variety of different levels of service,” Fontaine told Gloria Macarenko, host of CBC’s On The Coast.

He says complex care sites and assisted living sites are often in different locations and this means couples who have different care requirements must be separated.

Creating care centres where all levels of care are addressed in one place “is probably one of the key solutions,” said Fontaine.

“There are a number of seniors in $1,800 per day acute care beds when they can be living in the community,” he said.

Fraser Health recently announced they are closing 80 acute care beds and moving those dollars into community care, a move Fontaine said “will increase capacity and allow for more flexibility in the system.”

“It will take political will and a lot of creativity,” said Fontaine about finding long-term solutions for senior care.

In the short term, Fontaine suggested the province could temporarily purchase empty care beds from within the private system to make sure people are reunited.

The BC Care Providers Association has also created My Care Finder, a web site where people can look up available care beds in their region.