In early April of this year a heart breaking story appeared in the media highlighting a senior from Vernon, BC who was waiting over three months and in desperate need of admission into long term care.[i] A follow-up story that same month also showcased that the Interior Health region has the longest waitlist for long-term care among the province’s five health authorities.[ii] While unfortunate, these stories are likely to become more prevalent in the future as BC, like the rest of Canada, faces a rapidly aging population. In BC, for example, it is predicted the percentage of seniors will almost double to account for about a quarter of the population within the next twenty years.

With a growing and rapidly aging population, the continuing care sector will require new resources to meet the needs of seniors. Unfortunately, however, BC is already facing a shortage of long term care beds, which is affecting people and families who are impacted by delays to care including transitions from hospital or home health care. The BC Care Providers Association (BCCPA) in a recently released report entitled Bedlam in BC’s Continuing Care Sector: Projecting Future Long Term Care Bed Needs highlights many of these access challenges. As outlined in the BCCPA report and data provided by the Conference Board of Canada, BC is already short over 3,000 long term care beds. The same data also projects that BC requires an additional 31,000 (30,900) new long term care beds by 2035 to meet future demand due to a rapidly aging population (see Figure 1). 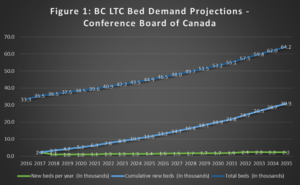 According to the most recent BC data, as of March 2018, there were about 1400 (1,379) persons waiting for admission into long term care – a 7 percent increase over the previous year. The majority or about 75 percent of those waiting for admission into long term care (1039 of 1379) were those living in the community compared to the remainder who were waiting in hospital.[iv] The latter group or alternate level of care (ALC) patients highlights not only the shortage of long term care beds but also the lack of other resources or supports in the community including home health care.

While new long term care beds are critical, it is important, however, to recognize that some of this demand can also be potentially offset through other areas in the continuing care sector particularly home health care and assisted living. While these areas and other approaches might mitigate some of the demand, no single intervention, however, will offset the demand for long term care beds as well as uphold individual preferences to remain in community as long and as independently as possible.[vi]

As highlighted in the BCCPA paper, while new approaches such as Bill 16 changes in regards to assisted living, new care models or regional initiatives to better ensure those who enter long term care need to be there will offset some of the future demand – substantial numbers of new beds will still be required. In particular, meeting new demand will require significant investments from the provincial government and health authorities but also perhaps even the federal government.

To meet future demand, the role of the private or non-government sector (including for-profit and non-profit) will also be critical, particularly from a financial perspective. The BC government recently announced that over the next two years, several health authorities (Fraser, Island and Vancouver Coastal) will be taking over the delivery of all funded home support services.[vii] This is likely to increase the costs of delivery of such care by as much as 30 percent and as such the BCCPA has also asked the BC Auditor General to review the Ministry of Health’s decision to cancel contracts with six non-government home care providers and expropriate over 4,000 staff into government-operated health authorities.[viii]

Similar to the anticipated impacts of expropriating home support services, the BCCPA believes that the costs to tax payers would be considerably higher if the government were to move funded long term care beds from the private sector to the health authorities. Also, the construction and operation of new long term care beds by the government would add major new costs to the taxpayer.

While a significant number of new long term care beds are required to meet demand, this also does not account for existing beds that may be in care homes in BC that are outdated and require renovation or in some cases rebuilding. As outlined in the BCCPA paper, about 40% of long-term care homes in Canada require significant renovations or to be rebuilt, according to one national survey.[ix]

Along with new bed demand and ensuring current care homes are up to date, some of the other challenges explored in the paper include rising levels of acuity or complexity as seniors are entering long term care later in life. With higher levels of acuity and meeting the demand for new beds, it will require substantial more health professionals particularly health care assistants. The BCCPA estimates that based on the Conference Board projection in which BC requires about 31,000 (30,900) new long term care beds by 2035, that to meet this demand it would require about 19,000 new care providers including almost 13,000 health care aides, 4000 nurses and 2000 allied health professionals.

As such based on various data sources as well as review of literature, the BCCPA in its latest policy paper Bedlam in BC’s Continuing Care Sector has put forward twelve practical recommendations to improve access to seniors care and increase overall capacity in the long term care sector (see Table 1 below). If fully implemented, the recommendations outlined in this report would be significant. For example, based on the Conference Board data, the total estimated cost of constructing and operating required for new long term care beds to 2035 in BC alone would be close to $30 billion.

Given the importance of seniors particularly with an aging population we believe that such investments, however, are worthwhile. Without concrete action, wait times and wait lists for long term care will only continue to grow as seniors are denied necessary access to the most appropriate care setting and ensuring quality of life in their remaining years.

[v] In January 2019, the BC Ministry of Health announced that over 120 new long term or residential care beds had been awarded to Golden Life Management for the Comox Valley region as part of an earlier RFP that had been posted on BC Bid (see: BC Ministry of Health News Release: Improving seniors’ care for the Comox Valley accessed at: https://news.gov.bc.ca/releases/2019HLTH0009-000040). These were part of an RFP that had been issued by Island Health in March 2018 and which closed in May of the same year (See: BC Local News. No updates on Island Health RFP for 120 long-term care beds. November 4, 2018. Accessed at: https://www.bclocalnews.com/news/no-updates-on-island-health-rfp-for-120-long-term-care-beds/).

#BCCPA2019 Conference Communiqué – That’s a Wrap! Seniors are waiting for home care to leave the hospital