When placing a loved one with dementia into a care home or assisted living, family or friends may often fear for their safety and quality of care. As people are living longer, it is believed the number of persons with dementia will rise.[i] Globally, there are an estimated 47.5 million people living with dementia, with the number expected to increase to 75.6 million by 2030 and 135.5 million by 2050.[ii]

According to the Ministry of Health’s Provincial Guide to Dementia Care in BC, dementia currently impacts roughly 62,000 British Columbians and is expected to rise to 87,000 by 2024. The increasing number of people diagnosed with dementia correlates to British Columbia’s aging population. In 2014/15, 47% of those with dementia were aged 85 or older, followed by 45% aged 65 to 84, and 8% with early onset under the age of 65[iii]  BC Ministry of Health data also shows that over 60% of residents in care homes across the province have dementia.[iv]

With the growing and aging population, not only is the incidence expected to rise but the prevalence of seniors with dementia, including those living within residential care, will increase considerably. These trends will challenge government, the continuing care sector, and health care professionals to explore new and innovative models to care for those with dementia. One of these innovative models that should be explored further in the BC context is the Butterfly Care Home model that originated over 20 years ago in the United Kingdom.

Following its initial introduction in 1995 at the Merevale House in Atherstone, UK – a care home for 36 people living with a dementia – the approach has spread across the UK as well as other countries including Ireland, Australia, Canada and most recently the United States. With over seven such homes underway in Canada (six in Alberta and one in Ontario) the Butterfly Care model first began here in 2015 with the Copper Sky Lodge in Spruce Grove, Alberta – a supportive living facility.[v]

Known as Butterfly Service homes, there are now over 50 project homes adopting this model through Dementia Care Matters, an organization founded by Dr. David Sheard.  Dr. Sheard, CEO of Dementia Care Matters, was also the closing key note speaker for the 2016 BCCPA Annual Conference, where in a riveting presentation he challenged delegates and care providers in attendance to rethink how they provide dementia care.

The BCCPA is excited to announce that Dr. Sheard will speaking at its second Care to Chat event for the 2017/18 season on November 15th in Vancouver where he will further outline the key elements of the butterfly care model as well as elaborate on the seven projects currently underway in Canada. Along with a key note speech, Dr. Sheard will also be providing a workshop the same day where participants will learn in greater detail what it really takes to create a care home where people living with dementia flourish, live longer, fall less, and eat more. In addition to being a renowned and riveting speaker, in 2014 Dr. Sheard received the UK award of Care Personality of the Year, with the judging panel noting his “beliefs, values, boundless energy and passion have driven changes that to many were only a dream.” 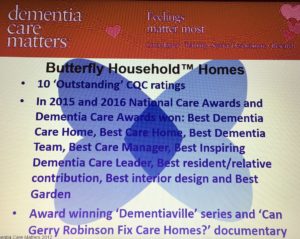 The Butterfly Household Model’s central belief is that the primary competency needed to achieve quality of life in dementia care is the development of emotional competency where ‘feelings matter most’. As outlined by Sheard, the core action required in this model of care is the implementation of an emotional labour strategy where being person-centred is practised as an organisational philosophy.[vi] The Butterfly approach generally consists of approximately 50 elements which fall under the following key areas:

While unable to go into detail on all 50 elements or the key areas, Butterfly Care Homes, which generally consist of family units of 8 to 10 people, provide a wide range of quality of life and service outcomes as outlined in the following table. In addition, as outlined in the BCCPA paper Strengthening Seniors Care (2017), much of the focus of the butterfly model is on changing the culture of care and providing greater person-centred care for those with dementia.[viii]

Initial evidence has also shown that the adopted approaches from the Butterfly Care model has not only improved the quality of care for those with dementia, it has also increased health and safety outcomes for seniors. The following statistics show some of the quantitative evidence collected from Butterfly Care Homes including in the areas of: falls – 43% reduction in incidents; expressions of behaviour – 58% reduction in incidents; weight gain – 15-18% increase; positive interactions – 81% increase; use of PRN (when necessary or as needed) medication – 100% decrease; use of PRN pain relief – 100% decrease; and sustainability – 90% achievement. [ix]

At the 2016 Continuing Care Collaborative hosted by the BCCPA, participants discussed which dementia care models or initiatives should be prioritized for development in BC. Of the options proposed, there seemed strong support for a variety of models, including the usage of butterfly care homes. 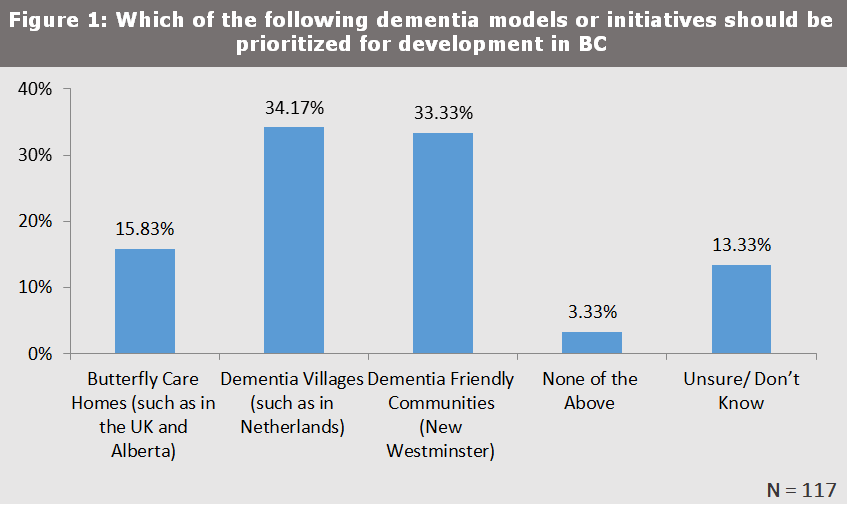 Based on this feedback and recognizing the need to improve dementia care, in its 2017 paper Strengthening Seniors Care, the BCCPA recommended that as part of any Dementia Strategy the BC government explore, where appropriate, the creation of new care models or initiatives to support seniors with dementia.  These new care models include but are not limited to Butterfly Care Homes, Dementia Villages and Dementia Friendly Communities (DFCs).

In summary, with the aging population and increasing numbers of seniors living in residential care or assisted living with dementia, there is a need to look at new and innovative models of care to provide high quality care that respects the autonomy and wishes of those with dementia. Whether the most appropriate approach is the Butterfly Care Home or another alternative model, there is a need to look at new approaches for providing dementia care. This includes looking at new models to meet the needs of a growing and aging population effected by dementia as well as those that can provide higher quality person-centred care. In this regard, the BCCPA is very pleased to have Dr. Sheard presenting at the November 15, 2017 Care to Chat to discuss these and other issues further, including how the Butterfly Care Home model may benefit care providers and the over 60% of residents in BC living in long term care with dementia.

[i] BCCPA. Op-ed: Exploring Dementia Villages and other Care Models in Canada. August 2015. Accessed at: https://bccare.ca/2015/10/op-ed-exploring-dementia-villages-and-other-care-models-in-canada/

[iii] BC Ministry of Health. Provincial Guide to Dementia Care in British Columbia. 2016. Accessed at: http://www.health.gov.bc.ca/library/publications/year/2016/bc-dementia-care-guide.pdf

[iv] Ministry of Health British Columbia. 2015. “Primary and Community Care in BC: A Strategic Policy Framework”.  Accessed at: http://www.health.gov.bc.ca/library/publications/year/2015/primary-and-community-care-policy-paper.pdf

The stuff of life: David Sheard on why the quality of interior engagement in care homes is so important Calling students to apply for BCCPA’s “40 for 40” bursary program