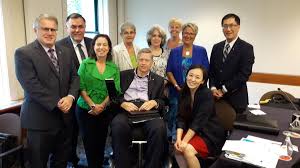 The BC Legislature’s all-party Select Standing Committee on Health invited the BCCPA to make a presentation last week regarding a number of important issues including improving access to health care services in rural parts of the province. In addition, the Committee requested the BCCPA present possible solutions to create a cost-effective system of primary and community care built around interdisciplinary teams.

“It was a great honour to have been selected to make an in-person presentation to the Members of the Legislative Assembly who form part of the committee,” says Daniel Fontaine, CEO for the BC Care Providers Association. “We were able to pull a lot of data and ideas from the two White Papers we just released in May and that we’re consulting with the public on this summer.”

Also on-hand for the presentation was Michael Kary, Director of Policy and Research for the BCCPA and author of the two White Papers. The Committee meeting was held in Vancouver and the presentation included a question and answer session that lasted approximately half an hour.

What follows are few excerpts from the official Hansard transcript:

Linda Larson (Chair): You mentioned a community in Manitoba that only has 4,500 people. I mean, my community has about 5,000, but there’s one private facility that would not be suitable for this care hub, and the others are all under the health authority. So how does that work if the only

residential — that type of care — you have is in a health authority?

D. Fontaine: First of all, it’s a challenge. I would say that rural British Columbia is more challenging to produce these than urban areas. Where they have been tried and where they have been implemented have been, mainly, in the urban centres. But that’s why I point out Niverville, Manitoba…because Niverville is only 4,500 people. One of the challenges they had was that the seniors that were within their communities were having to leave. They had to leave to get care.

So the community essentially banded together and said: “We’re done. We’re tired of shipping our seniors off to other communities.”…There was a care home already there as a nucleus, a centre for that — so that private residence could be, potentially, the nucleus for that — then they, essentially, built around it. They now have life leases there. They have assisted living. They have a complex care special dementia unit. All the services are there. 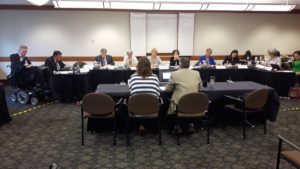 D. Barnett: So their standards also have to meet the public system?

D. Fontaine: Absolutely. In the model that they’ve built, it’s every dollar that they get in revenue from, say, their restaurant and their banquet hall rentals stays within the community.  They’ve got a daycare on site so that the workers actually can bring their kids and have them right at the daycare. Then the rest of the community can use the daycare as well…all the revenue from that goes right back into care… They call it social entrepreneurism. I think that is how they termed it. I didn’t get into exactly how much money they generate, but they said it was significant enough that it helped them to enhance the quality of life for seniors. They were able to do things for them that they might not have otherwise been able to do simply with the public funding.

A full transcript can be found by visiting Hansard services.