One of the most pressing issues facing the continuing care sector is ensuring sufficient levels of health human resources (HHR) exist. As outlined in a recent editorial on the BC Care Providers Association (BCCPA) website, despite the fact there are more people over 65 years of age today in Canada than children under the age of 15, there are only 261 geriatricians in Canada, compared to more than 3,000 pediatricians. [i]  Put in similar context, while there is one pediatrician for every 1,920 children there is only one geriatrician for every 22,200 seniors in Canada.[ii]

Some provinces are facing critical or even dire shortages. A recent article from Saskatchewan notes that it has only one practicing geriatrician.[iii]  Similarly, British Columbia is also facing significant shortages of such health care providers. As of 2012, it is estimated that there were only 40 geriatricians in BC.[iv] Along with geriatricians, there are shortages of nurses in the continuing care sector, including registered nurses and licensed practical nurses. Likewise, many care providers are facing challenges with the recruitment and retention of care aides.

Care aides are a vital part of seniors care as they provide up to 80 percent of the direct care received by older Canadians living in long term care.[v] While it is estimated that Canada employs as many as 250,000 care aides, a recent study from the three western provinces (Alberta, Saskatchewan and Manitoba) highlights the fact that such workers face increasingly high levels of burnout.[vi] Likewise, they face very high injury rates; in BC the injury rate for long term care workers, particularly care aides, is four times higher than the provincial average (9.3 vs. 2.3 per 100 workers).[vii] These high injury rates only exacerbate existing shortages facing the sector.

To better deal with issues around the recruitment and retention of health care providers for seniors care there must be a coordinated role between the continuing care sector, Ministry of Health and Health Authorities working collaboratively with colleges and universities. In particular, not only is there a clear role for colleges and universities in educating and training appropriate numbers of such health providers but also in ensuring that such training is relevant and practical. This includes, for example, allowing nurses and care aides opportunities to gain more practical hands on experience or training in seniors care as well as perhaps ultimately improving some of the perceptions of such careers.

Related to the issue of perception, part of the difficulty in the recruitment of such care providers may also be attributable to the focus seen by media and popular culture including television shows, which portray emergency care or maternity wards in more favorable fashion then perhaps care for seniors. Universities and colleges, working in tandem with stakeholders, could play a critical role in enhancing the perceptions of such careers including further targeting of such programs or careers to high school students. 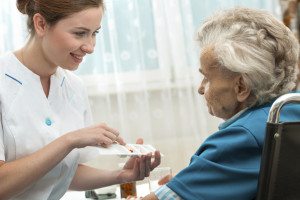 To deal with issues around the recruitment and retention of care providers, the BCCPA has been quite active in the past. For example, in 2010 the BCCPA initiated the BC Cares project which was funded by the BC government to address some of the HHR issues including demonstrating an increased appreciation for community health workers who provide care to BC’s seniors and families. One of the legacies of this project was the creation of SafeCare BC an industry funded, non-profit society working to ensure injury free, safe working conditions for long term care (LTC) workers in BC.[viii]

Dealing with HHR issues also requires looking at the role that new professionals, such as Nurse Practitioners (NPs) and Physician Assistants (PAs), could potentially have in the continuing care sector. Recent studies have highlighted the benefits of PAs, including that they can increase access to medical care for seniors.[xi] In particular, having a full-time PA on staff at a nursing or long-term care home can translate into residents being evaluated for illnesses sooner and in many cases can prevent unnecessary transfers to a hospital. A study from the United States also shows that having PAs in long-term care settings has decreased hospital admission rates for seniors by 38 per cent.[xii] PAs can also have an important role in preventing illness for many geriatric patients.[xiii] Despite this, there are currently no formal PA educational programs in BC.

Similarly, there are also only a small number of NPs in BC; as of January 2014, there were only 287 NPs registered in British Columbia.[xiv] Another survey also shows that less than 10% of NPs who responded (8% or 7 in total) identified residential care as a practice setting, despite the fact that evidence that shows NPs improve family satisfaction and staff confidence. [xv] In addition, NPs also reduce transfers to the emergency department, hospital admissions and length of stay, as well as lessen the overall workload for long term care physicians.[xvi]

A 2015 BC Care Providers Association (BCCPA) policy paper entitled Quality-Innovation-Collaboration: Strengthening Seniors Care Delivery in BC discusses some of these issues, particularly around the development of new care models, such as the Continuing Care Hub. As described further in the paper, a Continuing Care Hub is a network of individual care homes (or home care providers) sharing services and specializing in seniors care within a particular geographic area.

In this model, the residential care home or a network of such homes becomes the center for the delivery of a wide range of services for older adults, such as primary care services, sub-acute care, chronic disease management, and specialized geriatric services, among others. Two of the four characteristics that make the Care Hub innovative pertain to health human resources; specifically, how the model proposes to integrate health professionals in seniors care as well as new roles for care providers.[xvii] 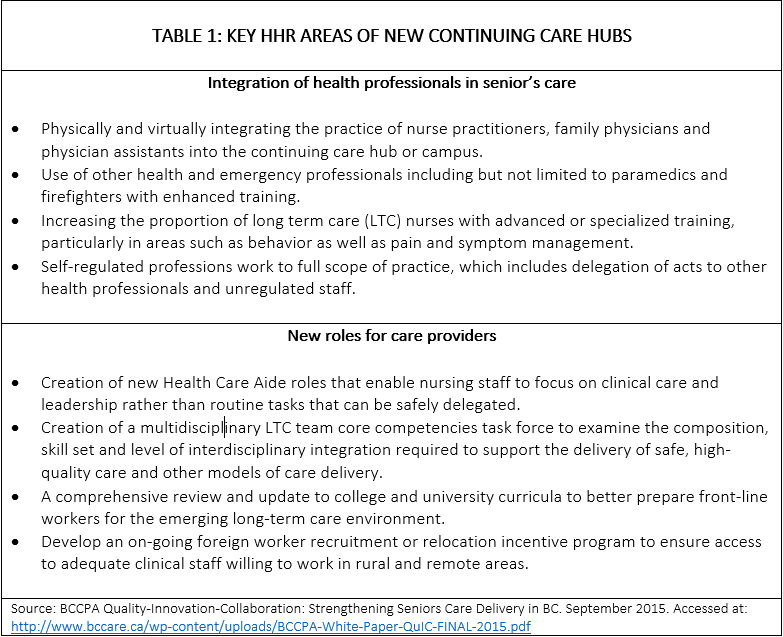 With a growing and ageing population, there is a need to better understand future HHR requirements, including projecting the future supply and demand for health care providers within the continuing care sector. This will become especially important as new models of care, such as the Continuing Care Hub and other team-based approaches, are developed and implemented. Likewise, we need to develop strategies to deal with improving recruitment and retention of health professionals; as well as better address injury rates which exacerbate shortages and better integrating roles for new care providers, such as NPs and PAs, into BC’s continuing care sector.  Finally, as outlined in the 2015 BCCPA Quality-Innovation-Collaboration paper, dealing with many of these HHR issues will require a redistribution of current funding, particularly shifting resources from acute to continuing care.Likewise, the federal government also has a role in health human resource planning including working collaboratively with provincial governments and stakeholders. As outlined in 2015 op-ed by the BCCPA, seniors care including potentially HHR issues should be an integral part of any new Health Accord. Along with addressing HHR issues in any new Health Accord, other areas where the federal government could take action include changes to immigration and/or its temporary foreign workers program to improve the recruitment of such health care providers to better meet the needs of Canada’s aging population. [xviii]

The issue of HHR is even more critical now given the BC Ministry of Health announcement in early April 2016 that it will be undertaking a review of staffing guidelines particularly direct care hours in government-funded long term care homes.[xix]  For example, attempting to reach a target of 3.36 hours per resident day could drastically increase the amount of staff that are required in long term care homes. 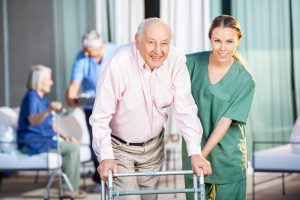 Along with residential care, issues relating to the recruitment and retention of home support workers (HSWs) are equally critical. In particular, along with over 1.2 million people in Canada using home care services annually and demand increasing significantly there are also difficulties attracting people to such work including a high percentage of HSWs nearing retirement age.  Many jurisdictions in Canada, including BC, are already facing shortages or anticipating shortages of HSWs.[xx] As demonstrated in an earlier report, Alberta, for example, is projected to need an additional 5,000 Health Care Aides (including those who work in private homes) by 2016.[xxi] As also outlined in the following article by Janice M. Keefe, four key human resource issues affecting HSWs include compensation, education and training, quality assurance, and working conditions. [xxii]

These are among the issues that the BCCPA hopes to discuss further at its Care to Chat entitled “Is there a doctor in the home? Dealing with HHR issues in BC’s continuing care sector” to be held at the BCCPA’s Annual Conference in late May 2016. This Care to Chat panel, moderated by Daniel Fontaine (CEO, BCCPA) will also include experts in the area of HHR including Dr. Samir Sinha, Director of Geriatrics at Mount Sinai and the University Health Network hospitals; Georgina MacDonald, Vice President, Western Canada and Developmental Initiative at the Canadian Institute for Health Information; and Chris Rhule, President, Canadian Association of Physician Assistants.

The BCCPA hopes this will be just the beginning of many future discussions on the importance of dealing with HHR issues, including the development of potential solutions to address these challenges facing the continuing care sector now and in the future. One possibility, for example, could include undertaking a new BC Cares Project initiative and/or establishing a permanent working committee or collaborative between the continuing care sector, Ministry of Health and other stakeholders to better deal with HHR issues on an ongoing basis.

[i] BCCPA. Guest Editorial. Dan Levitt. Who Will Care for Our Ageing Population? February 29, 2016. Accessed at: https://bccare.ca/who-will-care-for-our-ageing-population/. As noted in the article, if Canada had the same ratio of geriatricians as Sweden (600 for a population of 9.6 million), it would equate to approximately 2,200 geriatricians.

[iv] Hogan, David B. et al. “Specialist Physicians in Geriatrics—Report of the Canadian Geriatrics Society Physician Resource Work Group.” Canadian Geriatrics Journal 15.3 (2012): 68–79. PMC. Accessed at: http://www.ncbi.nlm.nih.gov/pmc/articles/PMC3521321/. As noted in table 1 of the article, different sources estimate between 39 and 43 certified specialists in geriatric medicine in BC.

[viii] SafeCare BC. Our Mandate. Accessed at http://safecarebc.ca/about-us/our-mandate/

[xvii] BCCPA.  Quality-Innovation-Collaboration: Strengthening Seniors Care Delivery in BC. September 2015. Accessed at: https://bccare.ca/wp-content/uploads/BCCPA-White-Paper-QuIC-FINAL-2015.pdf. As outlined in the paper the four key elements of the new continuing care hubs include: 1) integration of health professionals and family in senior’s care; 2) new roles for care providers; 3) new funding models; and 4) expanded role and co-location of services.