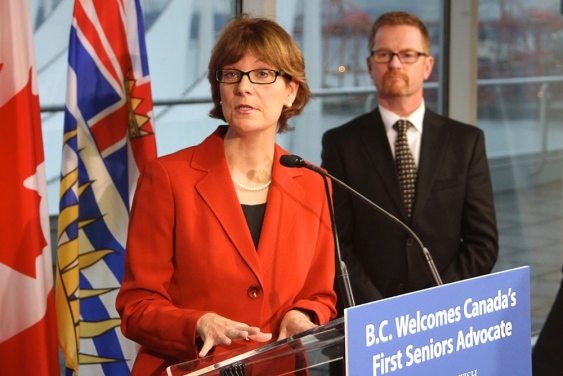 It’s one of life’s many ironies.

Unlike Eastern and Native cultures, where elders are respected and revered, in the west, the people with the most wisdom and life experience to share are often discounted or shuffled to the side, because our North American culture worships youth.

That’s about to change, as a result of the appointment this spring of Seniors’ Advocate Isobel Mackenzie. B.C.’s seniors now have a voice.

In her role as advocate – the province says she’s the first to have this role in Canada – Mackenzie will monitor seniors’ services, promote awareness, work collaboratively with seniors, families, policymakers, service providers and others to identify solutions to systemic issues.

She’ll also make recommendations to government – the Seniors’ Advocate Act mandates that they be made public – to improve the welfare of seniors. And like recommendations made by the Ombudman’s office and the representative for youths, they need not be implemented.

Since her appointment in March, Mackenzie has been visiting communities across B.C., listening to seniors’ concerns.

“We look forward to her as an organization and as an industry, to having her provide clarity on how seniors’ needs are being met and how they can be improved,” West said.

Locally, she visited the seniors’ residence Sunridge Place earlier this month. She’ll return to Duncan in September, to host a town meeting to hear from the population she’s been appointed to advocate for. A firm date and location has yet to be confirmed.

“The number one thing I’m hearing, without a doubt, what seniors are telling me, is, ‘I want to be valued, I want to be heard, I know what I want and I want people to respect my decisions, regardless of what you think of them,'” Mackenzie said.

Another thing that she’s heard again and again is that seniors want to be as independent as possible for as long as possible.

“They see government’s role as supporting them in their independence,” she said. “That looks different to different seniors.”

[quote name=”Isobel Mackenzie, BC Seniors Advocate” pull=”left”]The number one thing I’m hearing, without a doubt, what seniors are telling me, is, ‘I want to be valued, I want to be heard, I know what I want and I want people to respect my decisions, regardless of what you think of them[/quote]

The seniors’ advocate, who has an impressive track record of achievements in the seniors’ community, warned against expecting too much during her office’s first year.

“I don’t see anything concrete until next year, but will if something big comes up,” she said.

Having said that, there’s a lot going on behind the scenes, to get the new office up and running. Her office is being built, she’s hiring eight more staff in addition to the three already on board and listening to the people she’s been hired to advocate for.

“I wanted to get out there and listen and learn, what people say will inform how the office works, it takes time to do it,” Mackenzie said.

B.C.’s seniors can expect the office’s first annual report next spring and one annually after that.

Rather than dealing with individual complaints, her office will look at systemic issues, for example, repeat complaints about landlords evicting seniors.

“The office will have the power to compel people to give us information, that will help us in making our recommendations,” she said.

Those interested in learning more about the office can visit: www.gov.bc.ca/seniorsadvocate.com