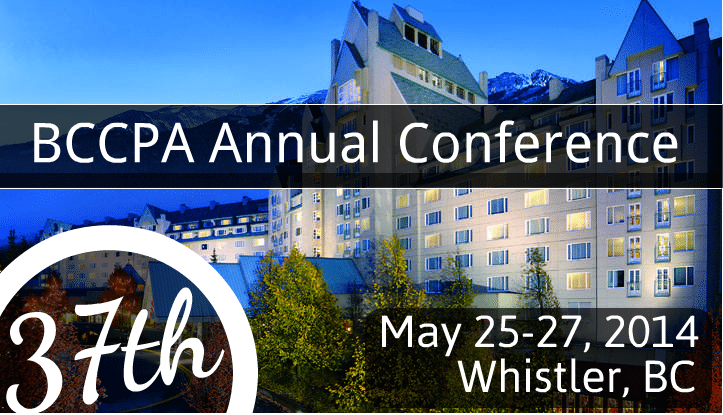 The online delegate registration system for the 2014 BCCPA Annual Conference being held in Whistler on May 25-27 is now open – click here. Be sure to register prior to March 31st in order to receive your discounted early-bird rate.

“This has been an exciting year of renewal at the BC Care Providers Association, and we are heading into the conference with a full head of steam,” says Daniel Fontaine, CEO. “In addition to the terrific speakers we have lined up, we are keen to update our members on the progress we have made this year, and our vision for the future.”

The theme for this year’s conference is ‘Best Practice, Better Care’, and it focuses on three streams: Residential Care; SafeCare BC (workplace injury prevention); and Home Care.

“A key focus of the conference is policy development and real-life strategies,” says Heather Campbell, Director of Policy and Research. “We have developed a stream of practical workshops that will give those in home and residential care ideas they can apply on the front-lines. Beyond that, we have invited experts to discuss how what we are doing here in BC can be enhanced by national and international perspectives.”

We are pleased to announce that former Deputy Premier and Minister of Health, Colin Hansen, will be joining the conference as a panel moderator. Hansen will be moderating a panel of health authority representatives, including Kim Kerrone, Vice President & CFO of Island Health. The discussion is entitled, BC’s Residential Care Funding Model- Lessons From Alberta, and is sure to be an intriguing conversation.

Also hosting a workshop at this years conference is Jennifer Lyle, the Executive Director of SafeCare BC. The session is entitled, A Dialogue with the New Executive Director, and offers an opportunity for delegates to learn about their new safety association, and find out about the wealth of resources they have access to.

In addition, we will also be recognizing the growing influence faith-based members are having within the BCCPA. A workshop titled Faith-Based Care: Unique opportunities based on a legacy of spiritual values is expected to draw a good crowd. It will feature guest panelists Ron Pike (Elim Village), Karen Baillie (Menno Place) and Dan Levitt (Tabor Village).

Earlier in February, we opened up the exhibitor booth registration and received a flood of registrations and booth requests. With only a few booths left, those interested in exhibiting at the conference should visit the online registration here, or contact Hart Dashevsky, Director of Membership Services, at hart@bccare.ca, as soon as possible.

“We are thrilled with the lineup of workshops and speakers we are bringing delegates at this year’s conference,” says Fontaine. “We extend our sincerest thanks to sponsors such as Medical Pharmacies, who allow us the opportunity to make visions like this a reality.”

We would also like to extend a warm thank you to Rexall who is gold sponsor of the conference. Both Medical Pharmacies and Rexall are also key sponsors of our special Care to Chat Speakers Series, and valued members of the BCCPA.

Also joining the sponsorship team are silver sponsors: Westland Insurance, Silver Group Puchasing, Extendicare, and Remedys who is also sponsoring this year’s golf event. Sponsoring a lunch is Marsh Canada. With a few opportunities left to sponsor, anyone interested in becoming a conference sponsor should contact Hart at hart@bccare.ca.

The BCCPA has also invited Bob Robertson to address attendees at the Gala Dinner. Bob Robertson is one of Canada’s premier political satirists as well as a humourous writer and stand-up comedian. He has performed for hundreds of audiences from coast to coast in Canada. He is also the star of many television and radio comedy programs on CBC, CTV and the Comedy Network. Bob looks at current events from a satirical point of view, bringing you his news which is ripped right off this morning headlines. He takes delight in poking fun at newsmakers, politicians, corporate CEOs, sports stars and Media celebrities, many of whom he sends up with his hilarious impersonations. He also takes great care to weave the audience into his presentation!

“This upcoming convention is sure to be a highlight of an already exciting year,” says Fontaine. “Get out of the office, out of your care homes, and come up to Whistler for an amazing conference with the rest of the industry!”