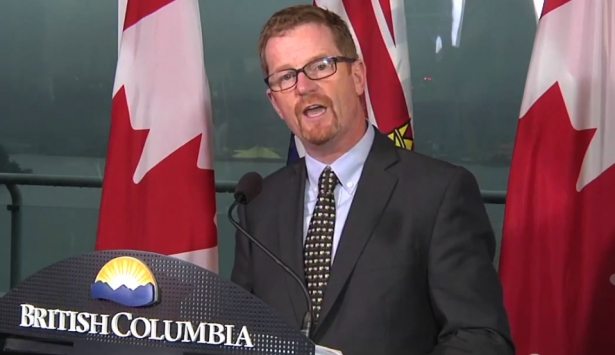 Health Minister Terry Lake encourages all British Columbians to learn about Alzheimer’s during Alzheimer Awareness Month. Minister Lake also shares the commitment of the BC Government to Alzheimer research and treatment, including its $6 million dollar investment in the First Link program. Read the full announcement by Minister Lake below, or click here to visit the BC Newsroom.

There are up to 70,000 British Columbians living with Alzheimer’s disease or a related dementia and as our baby boomer population continues to age, this number is expected to grow. This situation is not unique to British Columbia and is becoming a global epidemic as recently highlighted at the G8 Dementia Summit held in London, England.

January is Alzheimer awareness month and an opportunity to share information and increase awareness about this degenerative disease.

Because the symptoms of Alzheimer’s and dementia can vary greatly among patients and can progress very slowly, it is often a confusing and painful time for the patient, their family and their friends. I want British Columbians to know that we are committed to supporting the international and provincial research underway and to create programs that will help B.C. families facing this heart wrenching diagnosis.

By forming partnerships, we are sharing knowledge and are working to leverage resources to develop best practices for supporting diagnosed individuals and their families. In partnership with the Alzheimer Society of B.C., we have invested $6 million dollars to support the First Link program, which is designed to offer customized information and access to services as soon as possible after diagnosis.

Canada has been recognized as showing international leadership and we have dedicated scientists and health professionals right here in British Columbia who are working together to improve the lives of people suffering with this illness.

The Ministry of Health has been working hard on this front and released new guidelines on managing the behavioural and psychological symptoms of dementia; a key action in the Provincial Dementia Action Plan and part of our Seniors Action Plan.

The Ministry of Health is also working closely with the BC Patient Safety and Care Quality Council, which held a kick-off event in October 2013 for its voluntary Call for Less Antipsychotics in Residential Care (CLeAR) initiative. The aim of CLeAR is to enhance the dignity of seniors in residential care who exhibit behavioural and psychological symptoms associated with dementia by working collaboratively with facilities throughout B.C. to provide care that is individualized, non-pharmaceutical and evidence-based.

The ministry, health authorities and front line staff have taken an important step forward to improve the welfare of patients with Alzheimer’s and dementia and have been working on the implementation of a training program developed by P.I.E.C.E.S. Canada. The P.I.E.C.E.S. program is designed to provide a systematic framework for detection, assessment and care planning, using a comprehensive interdisciplinary client-centred approach. Implementation of the P.I.E.C.E.S. program in all health authorities will continue over the next two years and will complement the resources that already exist to support caregivers to provide care for those suffering with dementia.

By raising awareness and becoming informed of the signs, symptoms and services available, we can support those currently diagnosed with this disease to remain active and engaged members of their communities.

As your Health Minister, I would like to encourage all British Columbians to take some time this January to learn more about Alzheimer’s and dementia and do what you can to spread awareness and support affected families.