In the last six months at Cheam Village in Agassiz, BC, the home has maintained a usage rate of below five per cent of residents on anti-psychotic medication. There has also only been one incident where a resident has been assessed for the medication, although Cheam Village director and https://bccare.ca/wp-content/uploads/2022/08/medcare-img22.jpgistrator Ann Marie Leijen said it has been a work in progress over the last few years.

“In July of 2009, we received a family complaint regarding the use of anti-psychotics,” said Leijen. “They said we gave their mother anti-psychotics when she didn’t want it, and that we didn’t get consent.”

The home went through an investigation process where no fault was found, and in the following year Cheam Village reviewed all their residents on the medication and discontinued the use for those deemed appropriate. But Leijen said that didn’t matter because in 2011, the same family went to CBC News with the story.

“(TV investigative reporter) Kathy Tomlinson in a ‘Go Public’ episode featured the family and our care facility and the fact that we’re drugging seniors,” said Leijen, adding that although the show didn’t focus only on Cheam Village, they aired footage of the sign as well as shots taken in front of the home. That proved as a catalyst for Leijen and the rest of management to take a hard look at their anti-psychotic drug use policy.

And change they did. The team at Cheam reviewed literature and found evidence suggesting that anti-psychotic drugs actually made little difference — research showed that the drugs were no better than a placebo. Leijen said simply stopping the prescription was ineffective, but a more comprehensive approach to managing difficult behaviour needed to be adopted. In October 2012 they started initiatives that fostered closer partnerships with families and looked at tailoring treatments for each resident rather than blanket approaches.

Examples of these new initiatives include hiring a musical therapist who designed individual music therapy strategies such as being present during residents’ bath times; performing aroma therapy which has proven very effective with some residents; enhancing daily exercise routines and implementing a walking program; and accepting that a resident was opposed to an intervention at a particular time and returning after they have calmed down. [quote name=”Ann Marie Leijen ” pull=”left”]Staff safety was paramount in the changes we made. Staff was encouraged to report problematic behaviours on incident forms even if no incident actually occurred. This allowed proactive actions to be taken preventing injuries and reducing reportable incidents[/quote]

“Staff safety was paramount in the changes we made. Staff was encouraged to report problematic behaviours on incident forms even if no incident actually occurred. This allowed proactive actions to be taken preventing injuries and reducing reportable incidents,” said Leijen.

The result has been a significant drop in the use of anti-psychotic drugs, without an increase in use of other psychotropic medications. Asked how others could replicate their results, Leijen said, “it starts with a strong leadership team that recognizes and supports the need for change, and developing common goals, policies and strategies around the issue.”

In addition to cultivating and promoting a strong leadership team that supports change and buys into common goals to reduce the use of anti-psychotic drug use, Leijen has six other suggestions for BC residential seniors care facilities:

Today, Cheam’s care team is continuously making adjustments to their approach and they are continuing to get results. 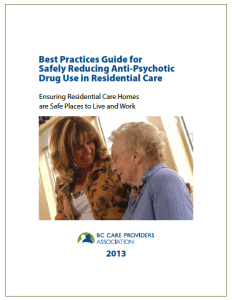 “Sure, anti-psychotics can be helpful for a short period of time. It makes you feel like you’re doing something — we are a helping profession after all. The doctor orders medication, everyone feels like they’re doing something. What happens is that it has become a culture, if you like,” said Leijen.

“In my experience, you don’t need them. They don’t make a whole lot of difference. The fact of the matter is that we don’t train our care aides enough on the issue. We don’t train our nurses enough. This is a huge culture change,” she added.

Cheam Village is a 68-bed complex care facility near Harrison Lake that has been operating since 2008, featuring 24-hour professional nursing care. For more information, visit their website.

– Written by freelance writer Benjamin Yong in part thanks to funding provided by WorkSafeBC.