A new Ipsos-Reid poll reveals a majority of Canadians don’t think our health care system will be able to cope with the needs of our aging society. The release of the poll was conducted in advance of the annual meeting of the Canadian Medical Association being held in Calgary. The National Post ran the following story:

Canadians have little faith the country’s health system is prepared to handle the needs of a looming “tsunami” of aging boomers, a new poll has found.

Six in 10 Canadians surveyed said they lack confidence in the health system’s ability to care for Canada’s rapidly greying population. 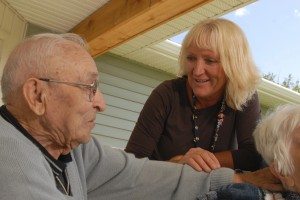 Women, as well as Canadians aged 34 to 54, and those already caring for an elderly person, are among those least confident that hospitals and long-term care facilities can handle the demands of a population that is living longer than at any other time in the nation’s history, according to the Canadian Medical Association’s annual report card on health.

Only in Quebec does a majority (54 per cent) believe that hospitals and long-term care facilities in their area are sufficient to meet the needs of the elderly, according to the survey.

The Ipsos Reid poll of 1,000 Canadians was released to coincide with Monday’s opening of the CMA’s annual meeting in Calgary, where main items on the agenda include a special session devoted entirely to end-of-life care issues.

“The anxiety Canadians have about health care in their so-called golden years is both real and well-founded,” outgoing CMA president Dr. Anna Reid said in a statement released with the poll.

All levels of government, including the federal government, “need to act to address the demographic tsunami that is heading toward the health care system,” she said.

A vast majority of Canadians — 93 per cent — support a national, seniors’ health strategy for home care and long-term care, the poll found, with support highest in Alberta and Ontario, as well as among women and Canadians nearing retirement age (55 to 65).

Three in five Canadians surveyed said they will have to rely on the public system for home care and long-term care if they need it later in life.

Half are “very” concerned about maintaining their health in their retirement years; seven in 10 are worried about their financial future, the poll found.

Those already caring for an older adult are among those most worried about there not being enough services should they ever need home or long-term care in their own old age.

Reid, who has been caring for her own elderly father, who suffers from dementia, said more resources are needed for nursing care, home-based care and palliative care, particularly in smaller communities. “We know how to do good palliative care, it’s just not being practised across the board,” she said in an interview.

It costs nearly $1,000 a day to keep a senior in a hospital bed, and $126 a day for a bed in a long-term care facility, said Dr. Louis Hugo Francescutti, incoming president of the doctors’ group.

“To keep them in home with supportive home care and assisted living costs about $35 to $50 a day,” he said. “We could be saving the system an enormous amount of money by providing far more support in the home environment.”

The average life expectancy of Canadians has increased by more than 30 years since the early 1900s, to 78 for men and 83 for women in 2011. But the number of years lived in good health is sliding. The majority of today’s seniors have at least one chronic condition; as many as one in four has two or more.

The Ipsos telephone poll was conducted between July 17 and July 26. A sample this size is considered accurate within 3.1 percentage points.

Three-quarters, or 75 per cent, of those surveyed gave an “A” or “B” grade to the overall quality of health services. However, views on the future are split — about half think health services will get better and the other half believe things will get worse.

Only about half gave an “A” or B” grade to access to diagnostic equipment such as MRIs and CT scans, or access to specialists. The marks were worse for mental health, with only 41 per cent of those surveyed giving an “A” or “B” grade for access to mental health services.

Few — 29 per cent — gave the federal government top marks in dealing with health care in Canada.