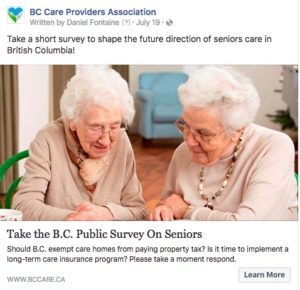 Our Seniors Survey is now closed as of midnight on August 31st. Over a period of 8 weeks an astounding 754 British Columbians completed our online survey asking for feedback on the ideas and concepts in our two White Papers. In addition to being circulated to our email network, the survey was also promoted heavily to Facebook users who have an interest in issues around aging and long term care.

“The response from the public has far exceeded our expectations,” says Daniel Fontaine, CEO for the BC Care Providers Association. “It’s great to see so many people engaged and helping us to shape the future of seniors care in this province.”

The survey was developed to provide public feedback on the issues and options outlined in the BCCPA’s two Sustainability and Innovation White Papers, which were released on May 16th, 2016. The first White Paper focuses on issues around the funding and financing of continuing care in order to ensure the vitality of the sector, while the second focuses on new care models, innovations and approaches to ensure the highest quality care for seniors. As such, the survey asked the public to provide their opinions on fundamental issues such as the use of long-term care insurance, care credits (i.e. vouchers), the development of a National Dementia Strategy, Dementia Villages, Continuing Care Hubs, and much more.

Respondents to the survey included health care workers, care home operators, researchers and academics, government representatives, as well as the general public, including over 400 seniors. The majority of survey respondents identified that they had direct interaction with the continuing care sector, having had either a family member or a friend receiving services in recent years.

“The survey will be critical in the development of the BCCPA’s final policy paper, which we are planning to release in early 2017,” explains BCCPA Policy Analyst Lara Croll. “We will be incorporating the feedback that the public has given us in our recommendations to government, as well as the sector as a whole.”

Results of the survey are scheduled to be released in late September and will be forwarded to the Ministry of Health and the regional Health Authorities for their consideration.