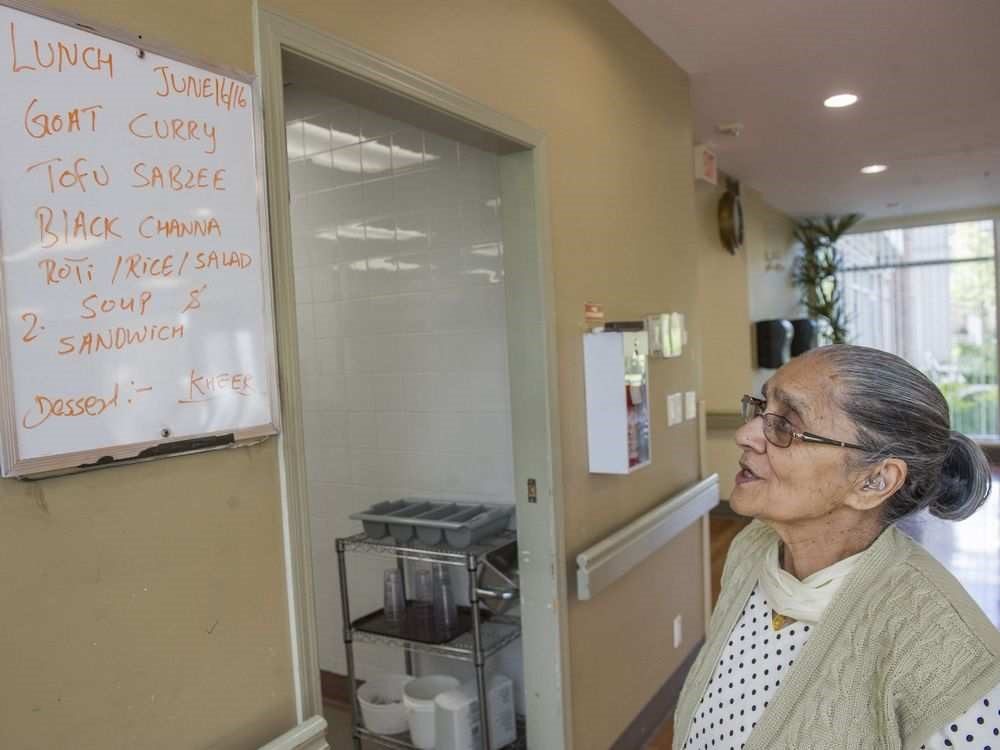 The following article was published in the Vancouver Sun on June 27 and is written by columnist Douglas Todd.

“Just a few” of the more than 260 residents of Guru Nanak Niwas seniors facility can speak English, says Saroj Sood.

Guru Nanak Niwas residents live in one of the few seniors homes in Canada that advocates consider “culturally sensitive.” That extends to food — “food is most important,” says Sood, an 85-year-old immigrant from India. The menu posted in the dining room on this day promises residents a lunch of goat curry, roti, tofu sabzi and kheer.

Even though Sikhism is highlighted in Guru Nanak Niwas’ name and its décor — such as the large exterior wall mural declaring “We Remember” the 1914 Komagatu Maru incident — the seniors’ facility is also home to South Asian immigrants of other religions, including Islam, Christianity and Hinduism.

Funded largely by provincial and federal governments, Guru Nanak Niwas was the brainchild of the Progressive Intercultural Community Services (PICS).

Now PICS is one of a range of B.C. immigrant-support groups pressuring governments to spend hundreds of millions of dollars to build more ethnic-specific facilities, including for Muslim and Chinese immigrants.

Some critics say taxpayers should not be paying for such ethnically-specific seniors homes.

But Sood and Charan Gill, the dynamic founder of PICS, insist there is a third major reason, in addition to language and cuisine, to create residences specifically for South Asian and other visible-minority seniors: Widespread elder abuse in the immigrant population.

“We hear stories of financial and emotional abuse of elders every day here. But no one wants to talk about it,” he says, noting that members of immigrant communities are often ashamed their co-ethnics are not properly taking care of their elders.

Even though Statistics Canada figures show South Asian grandparents in Canada are eight times more likely to live with their children and grandchildren than ethnic Japanese and Caucasian grandparents, many of Metro’s 250,000 South Asians still yearn to live separate from their offspring.

“Given a chance, these seniors would never leave their homes because of the strong sense of family and affinity towards their culture,” says PICS communications officer Shruti Prakash-Joshi.

“(But) PICS works very closely with seniors and we are witness to some horrific stories relating to financial and other abuse.”

PICS is lobbying the federal and provincial governments for more than $45 million to build a new “Diversity Village” on property it has bought in the Cloverdale area of Surrey. The 140-bed facility would have different sections for seniors of different ethnic backgrounds.

Meanwhile, leaders among Metro Vancouver’s 400,000-member ethnic Chinese population are also pushing for more of their own “culturally appropriate” seniors homes, which would employ Chinese-speaking staff.

As well, Muslim leaders in Burnaby and elsewhere are pressing the province for specialized seniors homes for immigrants from Muslim-majority countries.

With 45 per cent of the population of Metro Vancouver born outside the country, Canada’s National Household Survey reports one in six Metro residents do not speak English or French in their homes.

And he admits that B.C. government’s health authority officials are “resistant” to spend more money than is absolutely necessary on language-specific facilities. He rejects suggestions “culturally sensitive” seniors homes may promote ethnic enclaves.

Former Canadian diplomat Martin Collacott, a Surrey resident, says there is little wrong with ethnic communities creating seniors homes that offer ethnic-specific language and food — as long as the ethnic groups themselves pay for the facilities.

The author of a Fraser Institute report titled Canadian Family Class Immigration: The Parent and Grandparent Component argues it is the federal policy that allows many immigrants to sponsor their parents and grandparents to come to Canada that makes such ethnic-specific seniors homes necessary in the first place.

“The problem with such facilities being provided for sponsored parents and grandparents is that the rationale for bringing them in is that it is traditional for them to live with adult offspring, often to babysit. On this basis it becomes questionable why they would be placed in such care facilities.”

Collacott, who has frequently advised the House of Commons on immigration policy, wrote a paper for The Association of Canadian Studies that showed sponsored parents and grandparents who arrive in their 50s or older are the least likely to work in Canada, pay income taxes or learn French or English.

Despite some opposition, Gill staunchly advocates for governments moving beyond the “Eurocentric model” of seniors homes to the “multicultural model.”

South Asian seniors who end up in mainstream seniors homes in Canada feel “totally isolated,” Gill says. “Nobody talks to them. And they don’t get the food they’ve eaten their whole lives. Many give up and die quickly.”

Remaining confident of his vision, Gill tells stories about South Asian seniors in Metro Vancouver who had to move to “Eurocentric” care homes and who die within months.

And he couldn’t be prouder.