The annual two day meeting of the Canadian Alliance for Long Term Care (CALTC) took place in Charlottetown, PEI this week. The event is the one time per year whereby all of the provincial associations meet in-person to discuss strategy and find ways to strengthen the voice of the continuing care sector in Canada. British Columbia representatives included both the CEO and the Chair of the BC Care Providers Association as well as the Executive Director and Chair of the Denominational Health Association.

“This gathering is always a great opportunity to share ideas, identify areas to collaborate and pave a path toward increasing our influence on the national scene,” says Daniel Fontaine, CEO for the BCCPA. “Last year BC hosted the event which set the stage for a number of key decisions to be made this week regarding the future direction of CALTC.” 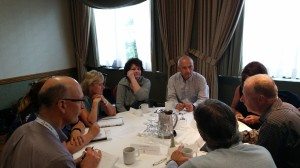 Highlights of the CALTC meeting:

The members of CALTC also participated in a vote to select the 2015/16 executive committee. The following individuals were elected:

“It was great to see industry leaders gather and actively commit to find ways to strengthen the sector and seniors care throughout Canada,” says Elaine Price, President of the BCCPA. “There is a real momentum with the organization now and you can’t help but think it will accomplish great things in the months and years to come.”

In addition to the annual meeting, the CALTC membership meets quarterly via conference call. Members of the executive meet on a more frequent basis throughout the year. The next annual general meeting has been set to take place in Fredericton, New Brunswick on Aug 21-23, 2016.

More in-depth analysis regarding what British Columbians told Nanos Research will be posted on the BCCPA website in the coming days.