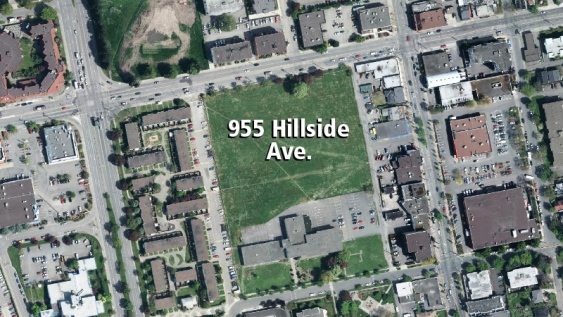 MEMBER ONLY: The Times Colonist covers Quadra Village being chosen as the site for a new $80 million seniors facility. The location will be the new home for Oak Bay Lodge. Read the full story below.

The playing field behind former Blanshard Elementary School in Quadra Village has been selected as the site for a new 320-bed seniors facility to replace Oak Bay Lodge and Mount Tolmie Hospital.

He said a formal announcement could come as early as next week.

The Greater Victoria school board, which closed Blanshard in 2003, owns the playing field and leases it to three companies.

The school building, occupied by CDI College, sits on a separate parcel and is not included in the deal.

No costs were released, but the playing field was assessed at $6.25 million this year. The hospital district board recently approved a 2014 budget that included $6.6 million for the Oak Bay Lodge replacement project.

The district and Island Health have been searching for land since last year, when Oak Bay council rejected plans to replace the existing lodge with a new six-storey, $80-million building at 2251 Cadboro Bay Rd.

It was the second time that Oak Bay had turned down the proposal, so Island Health began looking elsewhere.

Victoria, Saanich, Colwood and Langford all expressed early interest. Orr said officials focused on the Blanshard school site because of its proximity to downtown, health-care facilities and other amenities.

Victoria Mayor Dean Fortin said the possibility of locating the care beds on the old Blanshard school grounds “is a great opportunity for the community.”

“I am looking forward to engaging with local residents to see the potential for amenities for the local community, recognizing full well that just getting these beds is an amenity for the region,” he said.

No rezoning would be necessary as a seniors care facility fits within current institutional zoning as a permitted use, Fortin said.

“It is my happy expectation that the CRD is always a good neighbour and we’ll look forward as this moves forward into development, to look for an opportunity to reflect some amenities for the community, whether it be community gardens or access to public space — those sorts of things.”

“I think it’s an exciting opportunity for the neighbourhood,” said Victoria Coun. Ben Isitt, a member of the Capital Regional Hospital District board and council liaison to the Downtown Blanshard/ Hillside-Quadra neighbourhood.

“If that land cannot remain as green space then I think this is probably the next best option. It maintains an institutional use, provides for needed seniors beds in the community and it has an opportunity, I think, to help work to revitalize the Hillside-Quadra neighbourhood.”

Isitt said he would be looking for generous provision of green space in any proposal, “particularly for the children and families who live at Evergreen Terrace, formerly Blanshard Court.”

The Greater Victoria school board received word Friday that Education Minister Peter Fassbender has signed off on the sale.

“The board is excited by the proposal,” superintendent John Gaiptman said. “We are happy that the minister approved the disposal of the land and clearly the school district wanted to see the land returned to public domain.”