The BC Law Institute recently released its Report on Assisted Living in British Columbia. The report includes recommendations for the improvement of the legislative framework for assisted living in British Columbia. The Project Committee that developed the recommendations represented a broad cross-section of stakeholders, including residents, public and private assisted living providers, and health authorities. BCCPA board director Al Jina was a member of the committee. 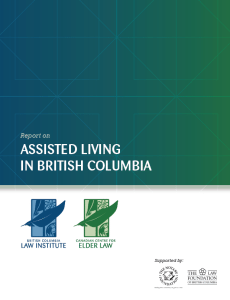 On October 1, 2013, the BC Law Institute issued the following media release:

BCLI and CCEL Release Report on Assisted Living in BC

Vancouver, 1 October 2013 – The British Columbia Law Institute (BCLI) and the Canadian Centre for Elder Law (CCEL) have jointly issued a Report on Assisted Living in British Columbia containing 50 recommendations for reform of the legal and regulatory framework for assisted living in B.C.  Issuance of the report coincides with the tenth anniversary of the founding of CCEL.

“The existing legal framework for assisted living was created in the very early stages of development of this form of housing in the province.  The Report on Assisted Living in British Columbia offers solutions to the legal and jurisdictional gaps in that framework.  It is based on lengthy and detailed deliberations by a very knowledgeable and experienced committee representing a cross-section of the different interests concerned with assisted living,” said Jim Emmerton, Executive Director of BCLI / CCEL.

The Assisted Living Reform Project Committee that developed the recommendations in the report included representatives from residents’ and tenants’ advocacy organizations, private providers of assisted living, BC Housing, a regional health authority, the Office of the Ombudsperson, as well as distinguished lawyers practising in the elder law field.

Assisted living is a form of rental housing where meals, light housekeeping, and certain personal care services are provided to residents in addition to accommodation.  It is intended for seniors and persons with disabilities who require some personal services, but not 24-hour care.

While the number of assisted living dwelling units in B.C. has increased greatly over the past decade,  the respective rights and obligations of residents and operators of assisted living facilities remain uncertain in many areas.  The BCLI / CCEL report contains reform recommendations to address these deficiencies in the existing framework, which were also identified and criticized in the Ombudsperson’s comprehensive report on seniors’ care in B.C. issued in 2012.

The BCLI / CCEL report was preceded by a consultation paper that sought input from stakeholders on proposals for improvement and refinement of the framework.  The recommendations in the report issued today were made after detailed consideration of the responses to the consultation paper from assisted living residents and their families, private and public providers of assisted living, care sector workers, and other stakeholders as well as the general public.

The Report on Assisted Living in British Columbia is available on the BCLI / CCEL website at: http://www.bcli.org.