On August 19th, WorkSafeBC and the BC Care Providers Association held a joint consultation session to discuss proposed 2014 premiums and our SafeCare BC application. This was the third in a series of teleforums over the last six months allowing our members and other continuing care sector employers to provide their feedback regarding the establishment of a new workplace safety association.

We sent out two invitations to the 310 people on the email list that was originally created by WorkSafeBC, then updated from additional research, and checked to ensure all members of BCCPA and Denominational Health Association were included. Of those 310 invited, 33 individuals registered and 21 participated in the teleforum. During the 70 minute consultation, a number of “real time” questions were fielded by the presenters which included Ian Munroe, Vice President of Employer and Worker Services, Stephen Symon, Manager of Industry and Labour Services, Gerry Paquette, Manager of Rate Modification and Classification, as well as Daniel Fontaine, CEO of the BCCPA. 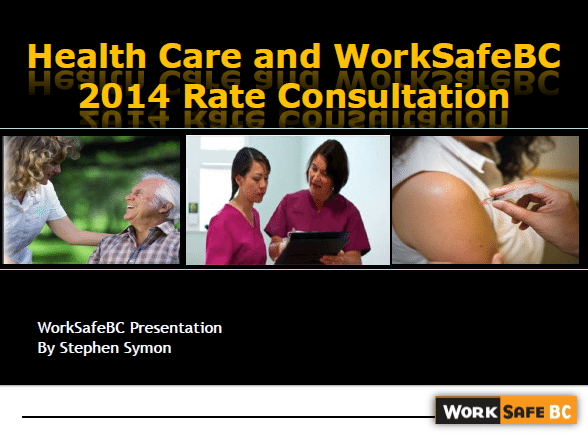 “I was pleased to see that WorkSafeBC was engaged and willing to participate in our final teleforum and consultation process,” says Fontaine. “As our members know, we had previously written to WorkSafeBC regarding our concerns about a possible delay with respect to the approval of SafeCare BC. However, I am now confident that we are back on track and will be able to get a decision sooner, rather than later. This could mean that as early as this fall we could begin implementing measures to reduce the number and severity of workplace injuries in the long-term care sector.”

WorkSafeBC has provided two presentations which can be reviewed online. They include proposed rate premiums for 2014 which are being pegged at $2.71 per $100 of employer payroll. The WorkSafeBC board has also indicated that no sector will see an increase next year beyond 10%, which means if SafeCare BC is approved, rates would be increased this year by 4 cents to fund a new safety association. As a result, the average rates would be set at $2.75, which is comparable to what employers were charged in 2011 ($2.70). However, it will be an increase from the current rate premiums for 2013 which are set at $2.50.

As we have previously written about, the SafeCare BC application is modelled after the Alberta Continuing Care Safety Association (CCSA) which was established in 2007. In the years subsequent to the launch of CCSA, Alberta’s Workers Compensation premiums for the long-term care sector have dropped to the lowest in Canada. In 2007 in Alberta the average provincial premium rates for the long term care industry were $2.25/$100 of insurable earnings. As of 2013 the premiums are now $1.53/$100 of insurable earnings, a 32% reduction since 2007.

Frequency rates have also had slow progressions downward. From 2005 to 2011 injury frequency rates dropped from 5.91 lost time claims per 100 workers to 4.89.

“We hope to hear good news from WorkSafeBC about our application,” says Fontaine. “It’s a great pro-active initiative that’s been led by the BCCPA for almost a year and it would be great to see everything come together this fall.”

For more information about the benefits of investing in SafeCare BC, please click here. If you were unable to attend the August 19th consultation, you can listen to it in its entirety by clicking here.