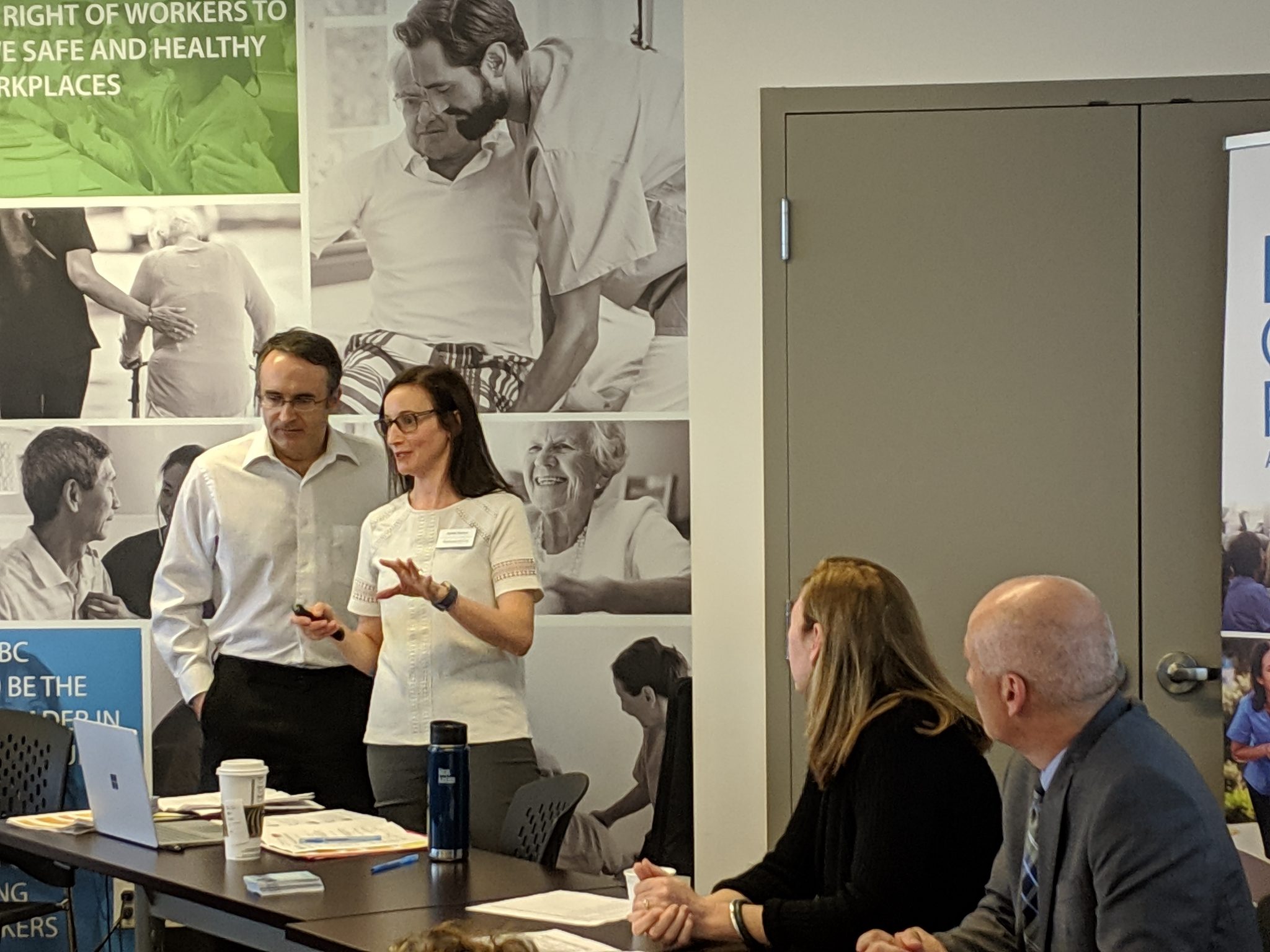 Last week, BC Care Providers Association (BCCPA) hosted a successful forum event with the Alzheimer Society of B.C. (Alzheimer Society) on a project they have been collaborating with the Simon Fraser University (SFU) Gerontology department related to the concept of dementia-friendly care homes. In attendance at the lunch and event were about 30 stakeholders from across the province and the continuing care sector including representatives from several health authorities and the B.C. Ministry of Health, care providers, persons with dementia, academia and SafeCare BC.

In a joint partnership with the Alzheimer Society and SFU Gerontology and as announced in a media release in December of 2018, BCCPA is examining what other jurisdictions in Canada and internationally have done, or are doing, to develop dementia-friendly criteria or guidelines in long-term care. As outlined in that media release and at the forum event, the number of persons living with dementia is expected to continue to escalate and is a particularly pressing matter in long-term care as it effects over 60 percent of residents.[i] 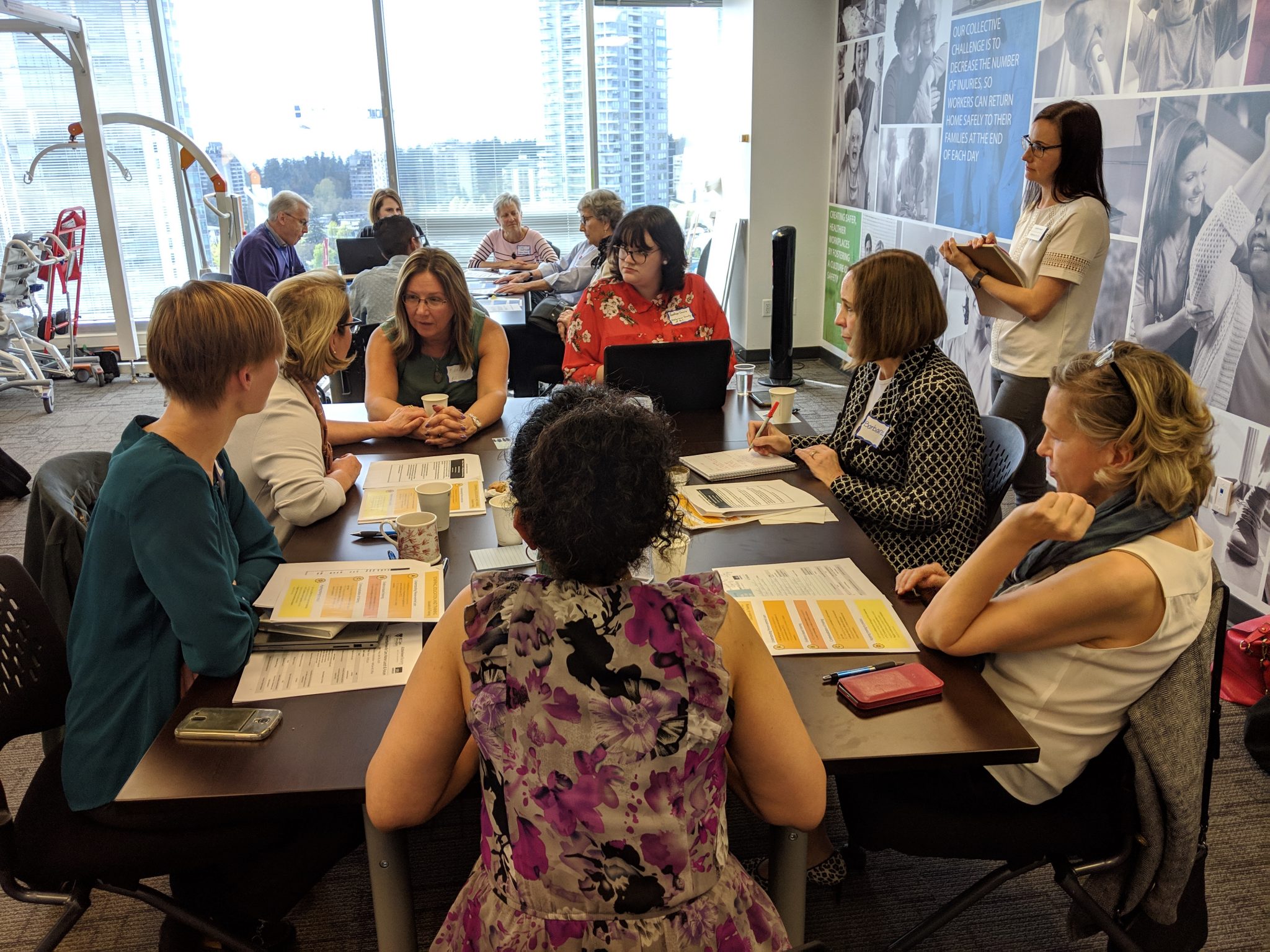 The initial impetus behind the project were multi-faceted including not only to better deal with the high numbers of residents with dementia and improve seniors quality of life in their remaining years but also to build upon the important work of the Alzheimer Society’s dementia-friendly communities initiative [ii] and earlier BCCPA policy papers outlining the idea of exploring a dementia-friendly program or designation in the B.C. long term care sector.[iii]

The project, which is expected to produce a final report later in 2019 to assist current and future care homes in using or implementing promising or best practices to become more dementia-friendly, focuses on two areas in particular, namely 1) the physical infrastructure or living environment and 2) staffing including training and education. As outlined at the forum, the physical infrastructure component includes creating environments that are distinctive, safe and familiar to seniors living with dementia.

As noted in one study creating supportive living environments can have a number of positive effects on people living with dementia including helping them stay oriented, improving daily activities, promoting autonomy and meaningful activity, reducing anxiety, agitation and falls as well as providing better person-centered care. The latter concept or importance of providing person-centered care was also a recurring theme throughout the forum including being mentioned by a number of speakers.[iv]

As outlined at the forum another fundamental element of making care homes more dementia-friendly is looking at ways staff engage or interact with the people they are supporting including adopting gentle persuasive approaches (GPA) to dementia care or implementing new care models such as the butterfly care model that originated in the UK and which was also mentioned several times at the event.

Overview of the forum 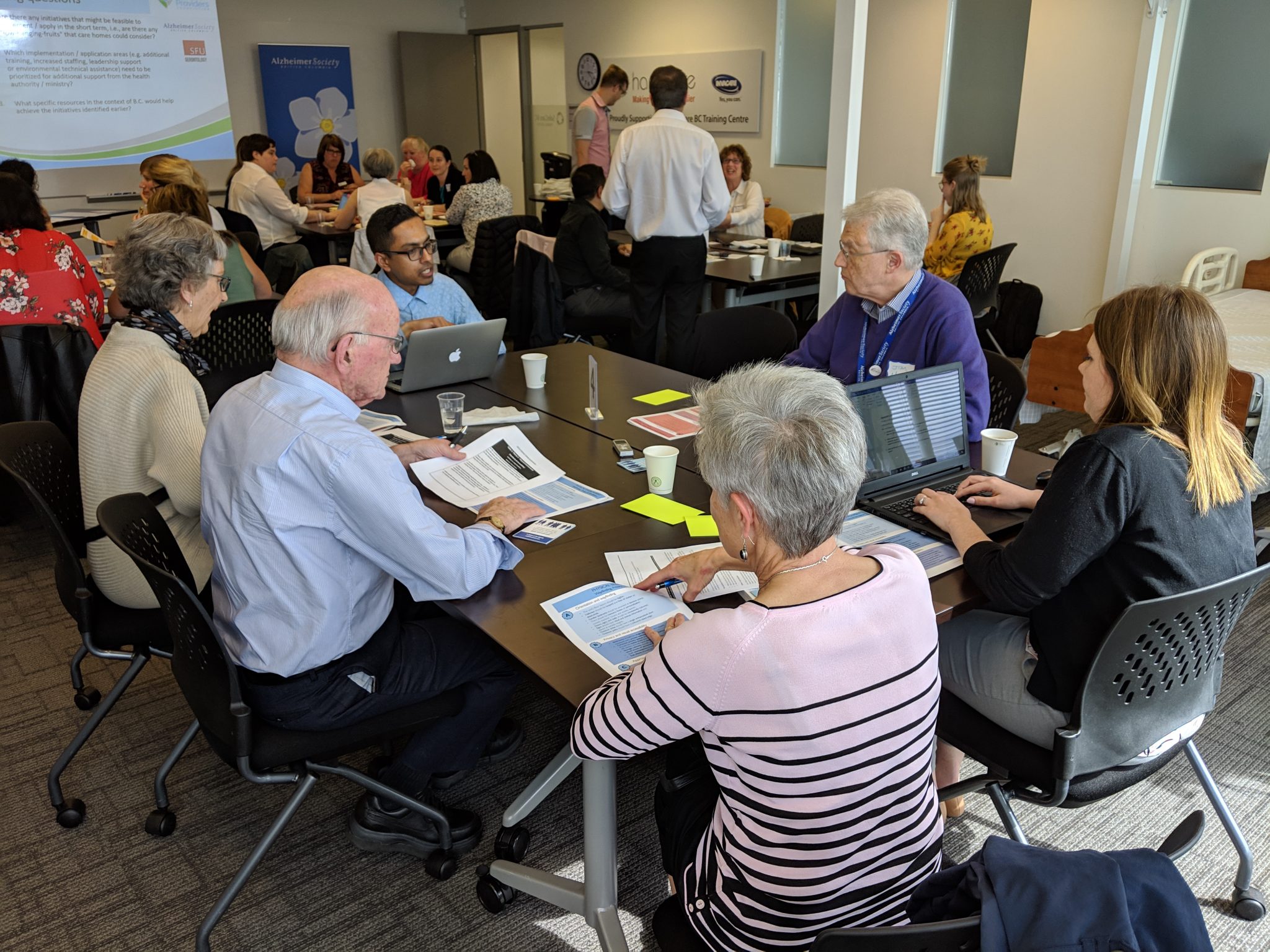 Along with providing an initial summary of the project by the co-hosts for the event (Jennifer Stewart and Michael Kary, from the Alzheimer Society and BCCPA, respectively) the forum featured a number of high profile speakers including Jim Mann and Ellen Allen who are members of Leadership Groups within Alzheimer Society of BC. Jim Mann, a passionate advocate for people living with Alzheimer’s disease, also sits on the federal Ministerial Advisory Board on Dementia to develop of a national strategy along with BCCPA CEO, Daniel Fontaine, who was also in attendance and provided opening remarks with Maria Howard, CEO for the Alzheimer Society of BC. The final guest speaker for the forum was Jas Gill, Dementia Care Lead in Long Term Care for Vancouver Coastal, who highlighted some of the important work that health authority is also doing to improve the quality of life of persons living with dementia.

Following the guest speakers, Dr. Habib Chaudhury and PhD student Kishore Seetharaman from the SFU Gerontology Department, provided a detailed presentation on some the key research findings they have found thus far related to dementia-friendly care homes within the areas of staffing, education and training as well as the physical or living environment. Their presentation, for example, highlighted various areas from the extensive literature review that they have undertaken including the importance of providing person-centered care, ensuring appropriate staffing levels and supports, developing smaller more contained household units, improving physical accessibility and safety as well as looking at ways to improve orientation, wayfinding and privacy for persons living with dementia. 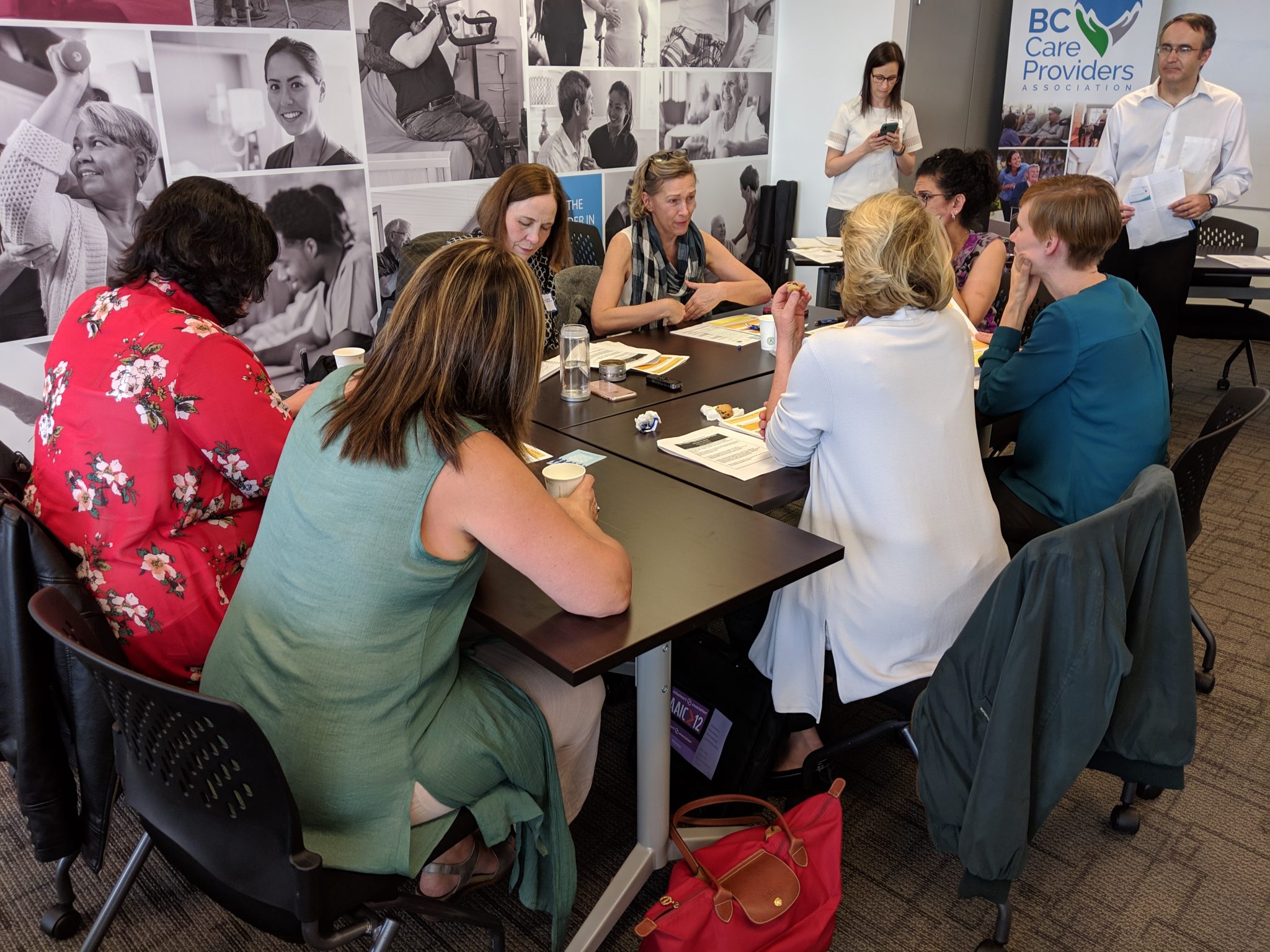 The majority of the forum, however, was focused on the table discussions that occurred among those participating at the event. Led by individual facilitators for each table, these discussions focused on various themes including education and training; staffing and care practices, familiarity and accessibility; as well as wayfinding, privacy and stimulation. To assist the facilitators, several guiding questions were provided including looking at potential short-term wins, areas that may need to be better prioritized for additional support and what resources are required to make care homes more dementia-friendly. Notes from these discussions will also be used to develop a summary document to provide to those in attendance and potentially other stakeholders within B.C.’s continuing care sector.

Along with developing a summary document of the event’s discussion, the input received from participants will be particularly helpful for the development of the final report that SFU Gerontology is developing and is expected to be released later this year to assist current and future care homes in using or implementing promising or best practices to become more dementia-friendly. 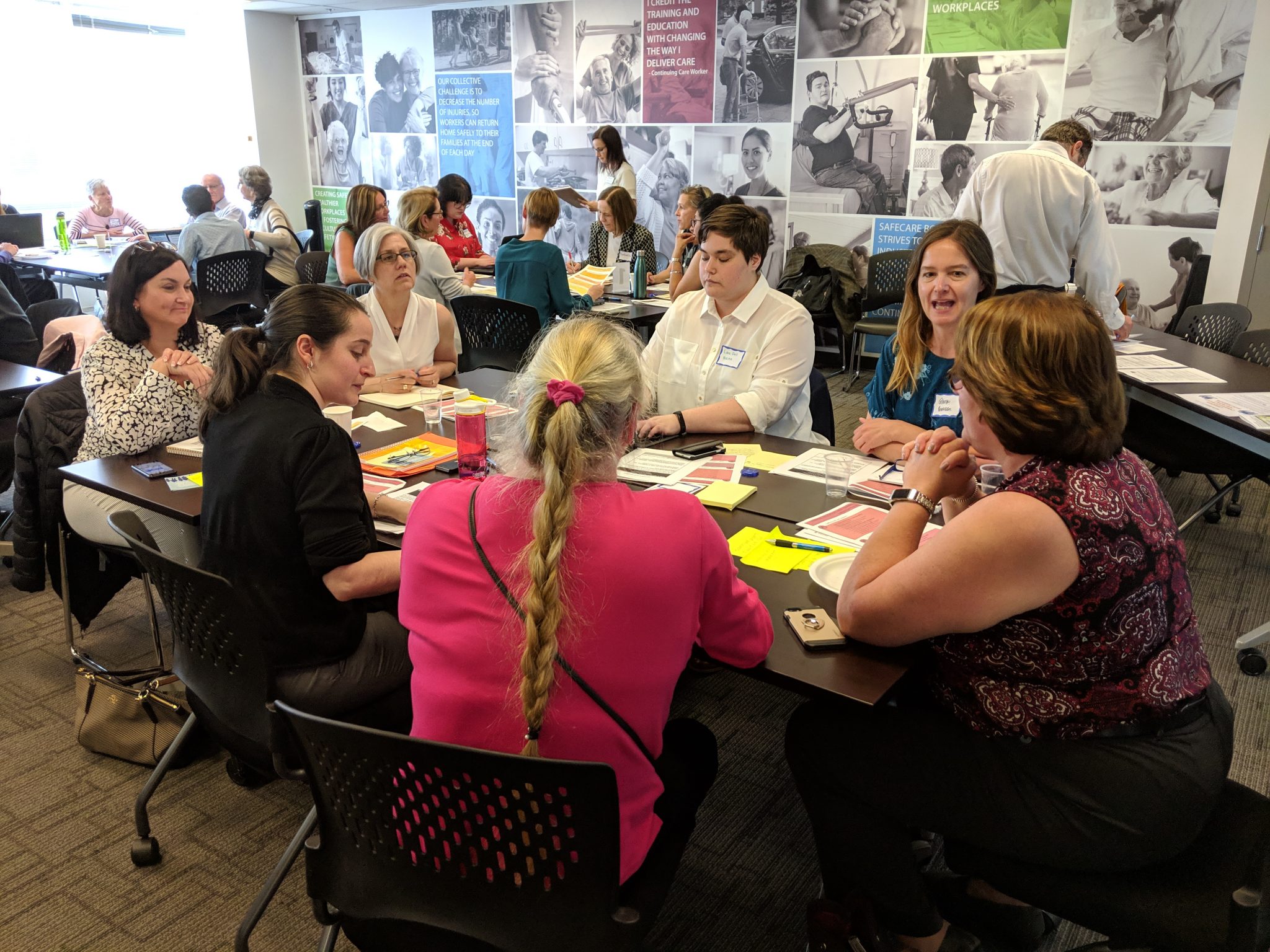 Following the table discussions and a summary from each table, next steps were also highlighted including outlining that this event is only the beginning of a very important dialogue or discussion. In particular, this project will be the focus of one of the 12 workshops to be held at BCCPA’s conference in Whistler in late May 2019 entitled “The Q Factor.” As part of this workshop, representatives from BCCPA (Michael Kary), Alzheimer Society (Heather Cowie) and SFU Gerontology (Dr. Habib Chaudhury and Kishore Seetharaman) will be presenting a panel discussion entitled “Are You Asking the Right Qs? What Does it Take to Become a Dementia-Friendly Care Home?”

After this workshop further opportunities will also be explored to discuss this project including potentially at a future BC Continuing Care Collaborative or Care to Chat event. As noted by BCCPA CEO Daniel Fontaine, “This is a very important project where it is will be essential for stakeholders across the sector to discuss and collaborate further to not only make care homes more dementia-friendly but improve seniors quality of life – a critical area which also happens to be the theme of the upcoming 2019 BCCPA Conference.”

[i] Canadian Institute for Health Information. Dementia in Canada. June 2018. Accessed at: https://www.cihi.ca/en/dementia-in-canada

[ii] The Alzheimer Society of B.C. through its Dementia-Friendly Communities initiative works closely with municipalities, professional groups, corporations and individuals to reduce stigma and remove barriers to support people living with dementia to participate fully in their communities and continue to enjoy the activities that are meaningful to them. For further information, see following link: https://alzheimer.ca/en/bc/About-dementia/Dementia-friendly%20communities

[iii] The idea of established the idea of developing dementia-friendly care home criteria in its 2016 White Paper, Sustainability and Innovation: Exploring Options for Improving B.C.’s Continuing Care Sector, where it advocated that, in partnership with relevant stakeholders including care providers, health authorities and the Alzheimer Society of B.C., the provincial government should explore establishing a dementia-friendly program in which a designation could be provided to care homes that have made specific redesign changes to accommodate people living with dementia and/or where dementia training has been provided to staff.

[iv] The Influence of the Physical Environment on Residents With Dementia in Long-Term Care Settings: A Review of the Empirical Literature. Gerontologist 2017, Vol 0, No. 0, 1-13. Habib Chaudhury, Heather Cooke et al. Accessed at: https://www.researchgate.net/publication/314514461_The_Influence_of_the_Physical_Environment_on_Residents_With_Dementia_in_Long-Term_Care_Settings_A_Review_of_the_Empirical_Literature