CKNW Future of Work Series: Caring for the next generation of seniors

BCCPA CEO Daniel Fontaine was featured in a CKNW radio program discussing the growth in seniors care, which we originally posted last spring. We are re-posting the original program and full transcript as part of our #BecauseBCCares campaign. The following was prepared by reporter Tim Dickert.

With more and more baby boomers entering their senior years, how we are going to take care of this growing segment of the population is a very important question.

And as the task of ensuring an aging population can live in dignity grows, so too does an employment opportunity for a whole new generation.

Daniel Fontaine is the CEO of the BC Care Providers Association, and says there are plenty of challenges on the horizon in the field of senior care.

Listen to “Future of Work Series: Caring for the next generation of seniors”

“Probably one of the most glaring gaps is around the issue of human resources. And we’ve all heard of industries that are lacking workers, but we’re also facing that in the continuing care sector as well. When it comes to home care, we get reports on almost a weekly basis across the province of worker shortages; there just are simply not enough people to fill those positions,” Fontaine says.

He says it’s a problem across the province, with residential care facing severe shortages in the Okanagan, Vancouver Island, and even pockets of Metro Vancouver.

“If we are going to have enough of a workforce to take care of an aging population we really do need to address that with a more robust health human resource plan,” says Fontaine.

“I know that the province just announced a few weeks ago that they are going to be adding an additional 1,500 employees, full-time workers within the sector so it adds even more pressure for us to ensure that we work with the colleges, with government, both federal and provincial to make sure we train enough workers to actually be out there to deal with that aging population in the next decade.”

Michelle is a home care aid in Surrey, who says she’s watched the field change since she got her start 20 years ago.

“So at one time I was, you know, if you gave somebody a shower you could have an hour-and-a-half up until three hours, now you get an hour maybe half an hour, and you’re just expected to just get them in and out.”

She says the industry is dealing with a financial crunch because of the growing population of seniors, many who need help, but the government just doesn’t have the money.

“So they’re putting it on our backs,” says Michelle, adding that it’s having a negative effect on workers.

“Fraser Health has just recently said that you can only have one shower a week, the rest is just a sponge. So one shower, and hair wash unless you’re incontinent, then you can have a few more. Yeah it’s bad, it’s really bad now.”

But with demographics aging up, the pressure is only going to increase, something Michelle says is a concern among her peers.

So if that’s where things stand today, and with more and more baby boomers entering their senior years, what does the future of working in seniors care look like?

“I can assure anyone that’s listening that if they’re interested or their son or daughter is interested in coming into senior’s care, it is a very long-term, kind of, safe career to move into because the future, if you look at the demographics, we just know that there’s so many people that are going to requiring care, whether it’s at home in a single family setting, in a home care setting, or in a more residential care setting.”

Fontaine says once workers are trained and in the system, they’re looking at better job security than say film or the digital economy which can get caught up in boom and bust cycles.

“We simply are not facing that prospect when it comes to seniors care,” he says.

But Michelle says she worries about how the system will be funded.

“I don’t think there’s going to be any money left to be doing this. So I think maybe there going to start putting everybody into homes. Because you can group ’em all together and then pay them. You know you don’t even have to be a unionized thing and you can just pay them less money and everyone will get a scrub. It’s not looking good because there’s no money.”

No matter which way you look at it, the future of caring for our seniors will require funding, innovation, and investment in everything from training, infrastructure, and technology. 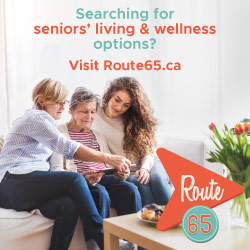