In 2012 the BC Care Providers was instrumental in spearheading an effort to establish a new safety association in partnership with WorkSafe BC. One year later, SafeCare BC was launched with a focus on supporting long-term care providers reduce injury rates.  Data just released by WorkSafe BC seems to confirm the BCCPA’s efforts to establish SafeCare BC is already beginning to pay dividends by way of lowering injury rates for staff throughout the province.

The injury rate for long-term care workers in BC shows a very promising downward trend. The 2016 injury rate, recently released by WorkSafeBC was 8.5, which is down slightly from 8.9 the year previous. What’s especially encouraging is that five years ago the rate was close to 10. 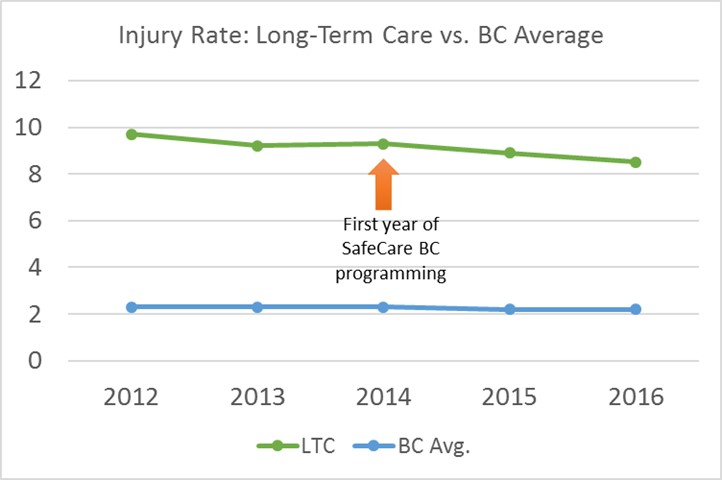 “This is very positive news, and a testament to the commitment and hard work of everyone working in long-term care.” says Jennifer Lyle, Executive Director of SafeCare BC. “Our collective challenge will be continuing to decrease injury rates even more, so our members can go to work and return home safely to their families at the end of each day.”

“We’re very pleased to see the efforts of our colleagues at SafeCare BC translating into some amazing results,” says Daniel Fontaine, CEO for the BCCPA. “The last few years have been an excellent partnership between WorkSafe BC, the labour unions, the BCCPA and Denominational Health Association as we work collaboratively to lower injury rates.”

Despite the decrease in injury rates, long-term care workers are still injured four times more than the average for all workers in the province. And while the injury rate for long-term care workers has been decreasing, the opposite is happening in in home health. Over the past five years, the rate of injury for home health workers has increased from 4.2 to 4.5. On January 1st, SafeCare BC expanded to cover all workers in the continuing care sector including those working in home care.

As the health and safety association, SafeCare BC is there as your resource. Check out their courses and training sessions, and other resources that will help reduce injury rates further.