Inaugural Care to Debate nets SafeCare BC a win

SafeCare BC were excited to be voted by delegates beforehand, to be one of three participants in the inaugural Care to Debate event. SafeCare BC’s executive director Jen Lyle made the case that a critical component to addressing the shortage of workers in the continuing care sector isn’t just to simply recruit more workers, but rather to also reduce the number of injured workers, so these highly skilled and trained individuals can remain to work. Furthermore, Lyle made the case that workplace health and safety be considered an integral part of the training, education, and evaluation of continuing care staff and operational leaders.

Jen was going up against two tough competitors: Ann Marie Leijen, CEO of Cheam Village and Glenwood (and chair of BCCPA’s Quality Improvement Committee), and Daniel Wanis-Ruiz, a Masters of Health Leadership Candidate. Ann Marie advocated that quality of life programming for BC seniors should not be the sole responsibility of the Ministry of Health, but instead other government ministries should become actively engaged in funding quality of life programs. Daniel’s position was that major cities should create a Chief Policy Officer position, who would work with public and private organizations to decrease caregiver burden by creating a Carers’ Policy in the workplace.

After presenting their case, the three presenters were put on the hot seat by a small panel, who asked tough, probing questions. The debate was punctuated by moments of humour that elicited laughter from an audience of more than 100.

As the debate drew to a close, audience members were invited to vote on their mobile phones. When the numbers were tallied, Jen’s motion held sway, garnering 53% of the support compared to 23% for both Ann Marie and Daniel.

Jen had these words of reflection, “SafeCare BC really valued the opportunity to highlight how workplace injuries exacerbate staffing shortages in this unique, interactive format. I also enjoyed listening to the other motions and would like to congratulate my fellow debaters on their excellent performance.”

Feedback from the audience was very positive:

“It was great. They should do this again.” – Jane

“I really liked it. It was interesting and made me think. It was informative and interesting to hear different perspective. I would definitely come to this event again.” – Beverly

To see a photo album of images from the Care to Debate event, see our Flickr page. 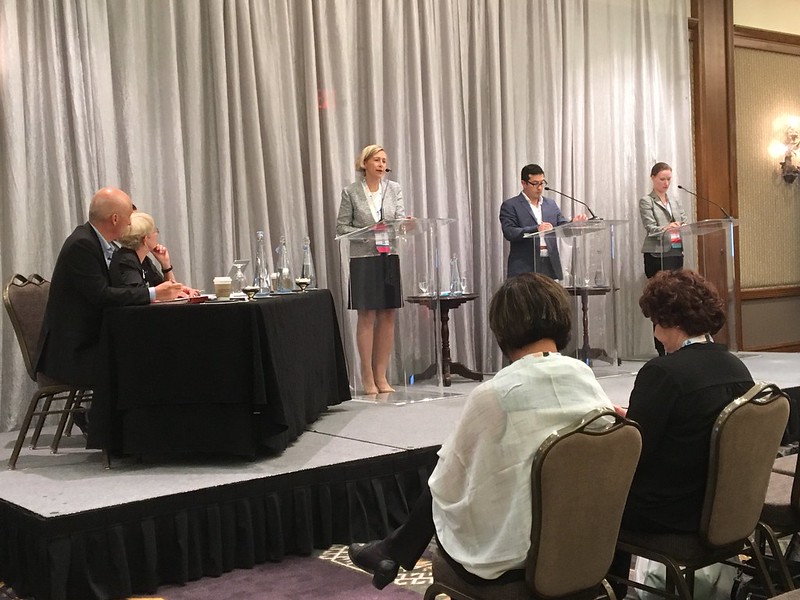