It didn’t take long for BC’s Official Opposition and labour unions to react to the release of the BCCPA’s report titled Strengthening Seniors Care: A Made-in-BC Roadmap. Judy Darcy, MLA for New Westminster and the NDP’s Health Critic was first off the mark. On Tuesday morning Darcy appeared on the Kash Heed Show on 107.7 Pulse FM and argued more needs to be done in support of seniors care in BC. She said the BCCPA’s report echoes much of what the NDP opposition has been arguing for the last several years in terms of a need for increased investments in long-term care and home care throughout the province. 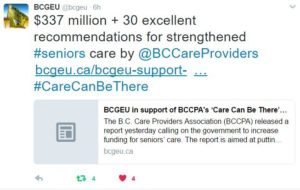 “The BC Care Providers report really echoes the kinds of things the Seniors Advocate of British Columbia and the NDP Official Opposition have been saying for some time now,” says Darcy. “The BC Care Providers aren’t using these words but I will, it is an outrage the state of seniors care in this province. I would go so far as to say that it is a national shame.  We have by the government’s own reports and admission, we know that in 82% of care homes in BC our seniors aren’t even getting the care hours that are set out in the government’s own standards…How can that be?” 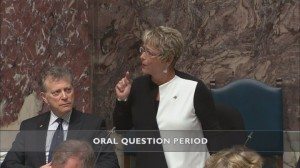 Darcy went on to say “I welcome this report because absolutely the government standard is 3.36 direct care hours for seniors and that’s the first step and they need to do it in every care home in the province.”

Heed then switched the topic of discussion to home care and questioned the minimum 15 minute visit times highlighted in the report. “I’ve got to question this 15 minute minimum time for home care, that’s completely ridiculous,” Heed told his listeners.  “It is ridiculous. I hear that…” Darcy replied.

I welcome this report because absolutely the government standard is 3.36 direct care hours for seniors and that’s the first step and they need to do it in every care home in the province – Judy Darcy, NDP Official Opposition Health Critic

Later in the day the BC Government Employee’s Union issued a statement whereby they endorsed many of BCCPA’s recommendations. “BCGEU applauds the BCCPA for its recommendations. BCGEU members in this sector face tremendous challenges when it comes to coping with staff shortages. Significant investments in both residential care and home support will have a direct impact on the quality of care seniors receive. With our aging population, it’s more important than ever that seniors’ issues are top of mind for British Columbians as they cast their ballots in this spring’s provincial election.”

Dr. Darryl Plecas, Parliamentary Secretary for Seniors also reacted to the issue of direct care hours in response to a new report released by the Office of the Seniors Advocate which indicates even fewer care homes are meeting the 3.36 direct care hour target. In a story posted on the Vancouver Sun website Plecas states “The standard we are most focused on is having care-providers deliver high-quality care at whatever level is most appropriate for an individual resident.”

It is important to note that funding for seniors care in BC is not provided on a resident-by-resident basis, but rather, it is delivered to care home operators as part of a global budget. There are currently no funding provisions in place for individualized care – rather, each care home is provided a standard level of funding for all residents. 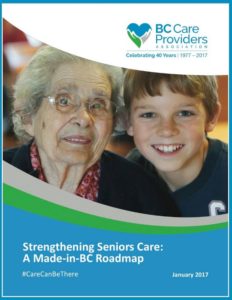 Selina Robinson, the NDP’s Critic for Seniors also reacted to the latest report from the Seniors Advocate. She tells the Vancouver Sun  “Here we are a year later and things aren’t working for seniors. Those are our grandparents and our parents … They’ve become tasks to be taken care of rather than people, because there’s not enough time in the system, and there’s not enough resources.”

According to the Vancouver Sun, the Senior’s Advocate argues “…fixing the problem in seniors care would require more funding.”

“There’s no way around it,” Mackenzie told the Sun. “Fixing direct-care hours is going to cost money. It’s about having the bodies there, and the bodies have to be paid.”

To listen to the entire Kash Heed interview, click on the link below.