SafeCare BC recently released the results of a poll they conducted of long-term residential care providers across the province. A significant majority of employers told them that they are currently facing shortages of workers. According to SafeCare BC, this shortage of workers may be one of the reasons which factors into a higher than average injury rate for the sector. What follows is a story which was published in the Vancouver Sun on Saturday, November 26th.

A study by SafeCare BC found 60 per cent of long-term residential care homes that participated in the survey have a worker shortage, and it is particularly acute on Vancouver Island, with 78 per cent of care homes reporting a shortage.

More than 75 per cent of employers fear they will not have an adequate supply of workers over the next three to five years. 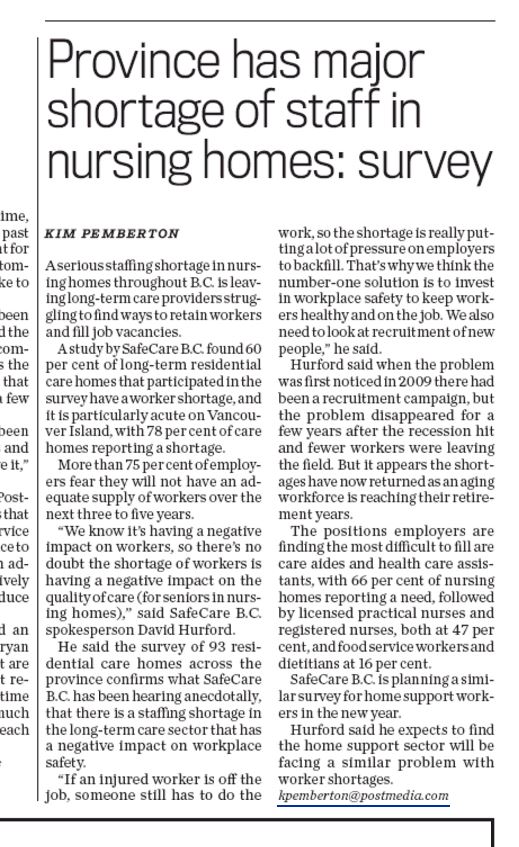 He said the survey of 93 residential care homes across the province confirms what SafeCare BC has been hearing anecdotally that there is a staffing shortage in the long-term care sector that has a negative impact on workplace safety.

“If an injured worker is off the job, someone still has to do the work, so the shortage is really putting a lot of pressure on employers to backfill. That’s why we think the number-one solution is to invest in workplace safety to keep workers healthy and on the job. We also need to look at recruitment of new people,” he said.

Hurford said when the problem was first noticed in 2009 there had been a recruitment campaign, but the problem disappeared for a few years after the recession hit and fewer workers were leaving the field. But it appears the shortages have now returned as an aging workforce is reaching their retirement years. He said the recent survey is an indication it is again time to focus on recruiting new workers to the sector.

The positions employers are finding the most difficult to fill are care aides and health care assistants, with 66 per cent of nursing homes reporting a need, followed by licensed practical nurses and registered nurses, both at 47 per cent, and food service workers and dietitians at 16 per cent.

SafeCare BC, which is a non-profit society working to ensure injury-free safe working conditions for long-term care workers, is planning to conduct a similar survey for home support workers in the New Year.

Hurford said he expects to find the home support sector will also be facing a similar problem with worker shortage, noting many workers eventually leave home support to work in the long-term care sector since the pay is higher and workers are part of a team instead of working alone.