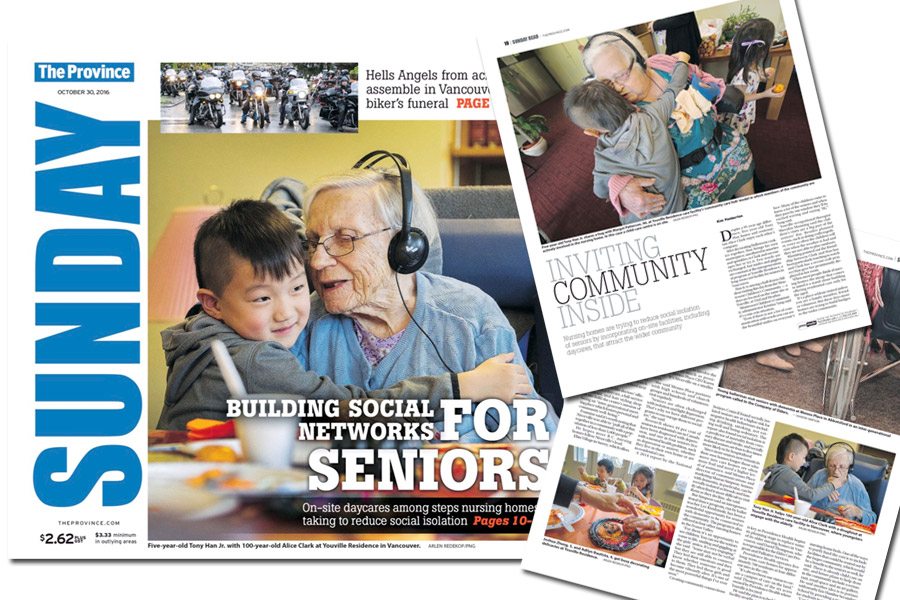 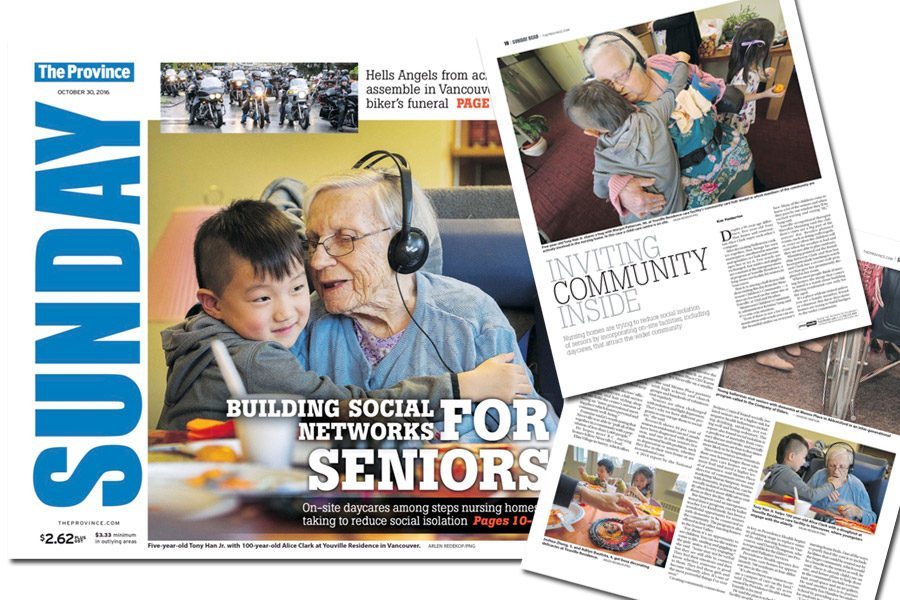 Originally published as the front page story in The Province newspaper. Download a PDF copy of the story here.

After decorating Halloween cookies together Han brings his own masterpiece, smothered in smarties and sprinkles, to Clark and encourages her to try it. Few words are exchanged, but smiles and giggles are constant at the intergenerational program at Youville Residence, a long-term care facility for seniors in Vancouver.

Han Jr. is among a half dozen children visiting this day from the Montessori Children’s Community — a daycare located on the same site as Youville, at 33rd and Heather.

“Even if there is not a lot of communication with words you can see the beautiful smiles on everyone’s face. Many of the children come to know a lot of the seniors and when they pass by our window they’ll be excited waving and saying ‘hi’,” Yang said.

Youville occupational therapist Sheralyn Manning said the children’s visits are a big part of the seniors’ day. Besides planned events, such as doing crafts together, every so often the children will visit when the weather is bad and they are not able to play outdoors.

Manning pointed out the friendship between Clark and Han has been particularly touching to watch and Clark has a recent craft project Han gave her prominently displayed in her room.

When most people think of nursing homes the image that comes to mind is a stand-alone building offering residential care only for the aged. It’s a place seldom visited unless you are a family member, friend or volunteer. But these days more homes are trying to build bridges to the wider community.

Of B.C.’s 460 government and private nursing homes, only a handful have daycares or doctor’s offices on site, said Daniel Fontaine, CEO of the B.C. Care Providers Association, which represents 60 per cent of the privately-operated homes. But none are attached to a facility that offers a large variety of community services.

One of the best Canadian examples of a nursing home that achieves just that, said Fontaine, is Niverville Heritage Centre, near Winnipeg, Manitoba. It is home to 116 seniors but is also a gathering place for major community events.

The centre hosts 100 weddings each year. As well, about 50,000 visitors drop in at the centre annually to access their doctor’s office, dentist and pharmacist or visit the full-service restaurant and pub.

“We found seniors don’t want to be retired to a quiet part of the community and left to live out their lives. They want to live in an active community and retreat back to their suite when they want that peace and quiet,” said Niverville Heritage Centre’s CEO Steven Neufeld.

Before the centre opened in 2007, he said, members from the non-profit board that operates the centre visited traditional nursing homes and discovered that the lounges that were built for seniors  were seldom used.

“I remember going to one place where there was a screened-in porch that was packed. The seniors were all there wanting to watch the soccer game of the school next door,” he said.

Having services like doctors’ offices, dentists, a daycare, a full-service restaurant, and hair styling shop on site fulfill the centre’s mission of being an “inter-generational meeting place which fosters personal and community well-being.”

Fontaine said it’s worth noting that Niverville was able to “pull all of this together in a community with a population of less than 5,000 people.”

Elim Village in Surrey, which offers all levels of residential senior care on its 25-acre site, is on that track. There are 250 independent living units, 109 assisted living units and 193 traditional nursing home beds. The village also has a 500-seat auditorium, located in the centre of the village, that hosts weddings and is available for rent for other public events. Elim Village also rents out space in one of its 10 buildings to a school, which allows inter-generational programs to take place easily between students and seniors.

Another “continuing care hub” at Menno Place, in Abbotsford, has a public restaurant called Fireside Cafe, popular with staff from nearby Abbotsford Regional Hospital and Cancer Centre. There’s also a pharmacy and hairdresser on its 11-acre “campus” site but these services are available only to the 700 residents and staff.

“We purposely try to involve the community as much as possible,” said Menno Place CEO Karen Baillie. “It’s Niverville on a smaller scale.”

“Seniors are often challenged with isolation and fight depression. That’s why we have different programs to encourage them to socialize,” she said.

A 2014 report by the National Seniors Council found socially isolated seniors are at a higher risk for negative health behaviours including drinking, smoking, not eating well and being sedentary. The report also found social isolation is a predictor of mortality from coronary disease and stroke, and socially isolated seniors are four to five times more likely to be hospitalized.

Since more seniors now remain in their own homes longer those who move into care homes are often more frail and need a higher level of assistance, said Menno Place director of communications and marketing Sharon Simpson. Seniors with dementia, in particular, can be socially isolated as friends and family often find it more difficult to visit them as they decline, she said.

But Simpson said an intergenerational dance program, run by ballet teacher Lee Kwidzinski, has been a wonderful opportunity for seniors with dementia to be connected to community. The program is also offered in four other nursing homes in the Fraser Valley.

“For them it’s an opportunity to see children. You can see the seniors come to life, smiling and giggling at the girls’ antics. It’s very engaging,” she said. “Some may not be verbal but they are still able to connect. They feel their emotions and they know whether someone is good to them. They feel these girls and become vibrantly alive. It’s one of the most powerful things I’ve ever seen.”

Creating community connections is key as Providence Health begins its planning stage to replace some of its older nursing homes in Vancouver, said David Thompson, who is responsible for the Elder Care Program and Palliative Services.

“It’s always been our vision to create a campus of care on the land,” said Thompson, of the six acres owned by Providence Health where Youville is located.

He said the plan is to build another facility nearby, with 320 traditional nursing home beds. One of the ways to partly fund the cost is to include facilities that could be rented out by the larger community, which would be a benefit to the seniors as well, he said.

There is already child care on site, and future plans to help draw community include a restaurant, retail space and an art gallery. He said another idea is to partner with nearby Eric Hamber Secondary School by providing a music room for students to practice.

“Cambie is at our doorsteps.  If you have people coming in (to a residential care facility) it brings vibrancy and liveliness,” Thompson said.

Facebook
Twitter
LinkedIn
WhatsApp
PrevPreviousCan we do more to support mental health & wellness of continuing care staff in BC?
NextGovernment Proposes Major Reforms to BC Care Aide RegistryNext
Sign up for
our e-newsletter