BC Continuing Care Collaborative: What Did We Learn?

We have all heard it before – with the aging population, Canada including BC, is facing a tsunami as health care expenditures for seniors continues to rise. While these reports of a ‘silver tsunami’ may be exaggerated and many organizations are doing excellent work to champion innovative solutions to enhance care for BC’s seniors, all too often these are largely isolated efforts, with stakeholders working separately, often in silos. Unfortunately, the net result of this fragmentation is that there is little general agreement on how we will ensure that seniors in our province are going receive high-quality care and support over the next several decades.

Working to change this isolation, the BC Care Providers Association (BCCPA) hosted the inaugural BC Continuing Care Collaborative (BCC3) at the SFU Morris J. Wosk Centre for Dialogue on September 20, 2016. The BCCPA, in partnership with the BC Ministry of Health, brought together over 140 stakeholders from across the continuing care sector to turn ideas into action. This diverse group of stakeholders included care providers, health authority representatives, labour unions, NGOs, research institutions, caregivers, the BC Senior’s Advocate, and seniors themselves, all dialoguing and building consensus around key issues pertaining to the future of senior’s care in BC.

The subject matter of the Collaborative was based around two major White Papers  released by the BCCPA in May 2016, which outlined a broad spectrum of potential options to enhance quality, improve sustainability and promote innovation in the continuing care sector. In particular, the stakeholders at the Collaborative voted in real time on policy options and strategies focused on five key issues: funding and financing of continuing care, enhancing dementia care, Continuing Care Hubs, as well as seniors well-being including health promotion and social isolation. While participants held diverse opinions and perspectives, some areas of agreement included:

While the BC Continuing Care Collaborative was a precedent setting event in terms of the diversity of stakeholders that it brought together, the September 20th event was in fact the culmination of a significant consultation and engagement process that the BCCPA undertook over five months. In particular, the BCCPA in May of 2016 started a dialogue on the future of seniors’ care through a number of different avenues.

The first was an in-depth policy café at the BCCPA’s annual conference in Whistler, where over 30 health care experts across BC analyzed policy options on the funding and financing of seniors’ care, enhancing quality, new care models and innovations as well as health human resources. In June the BCCPA also launched a public consultation process through an online survey, which received over 750 responses – over 400 of which were seniors. Significant results from the survey include that:

A report featuring the results of both the public and BCC3 survey can be found here.

In order to encapsulate the significant feedback from this five-month consultation process, the BCCPA is developing a final policy document to be released in early 2017, that will include recommendations to the BC Government, the Health Authorities, and the seniors care sector as a whole. This paper will identify priority areas where significant consensus already exists so that these ideas can be turned into action without delay.

While the collaborative process has demonstrated that there are policy areas where significant consensus exists, not all of the policy options and strategies outlined by the BCCPA were broadly agreed upon. For example, while it is generally accepted by the health care sector and the BC Ministry of Health that there needs to be a transfer of resources from acute care to home and community care, 41% of participants at the BCC3 were unsure if a 1% shift of health authority acute care budgets would be enough, while 38% believed that it would be too little. Furthermore, while 93% of attendees at the BCC3 agree that Continuing Care Hubs should be a priority for development in rural regions of BC, there was less agreement around which services should be offered by such a model of care. 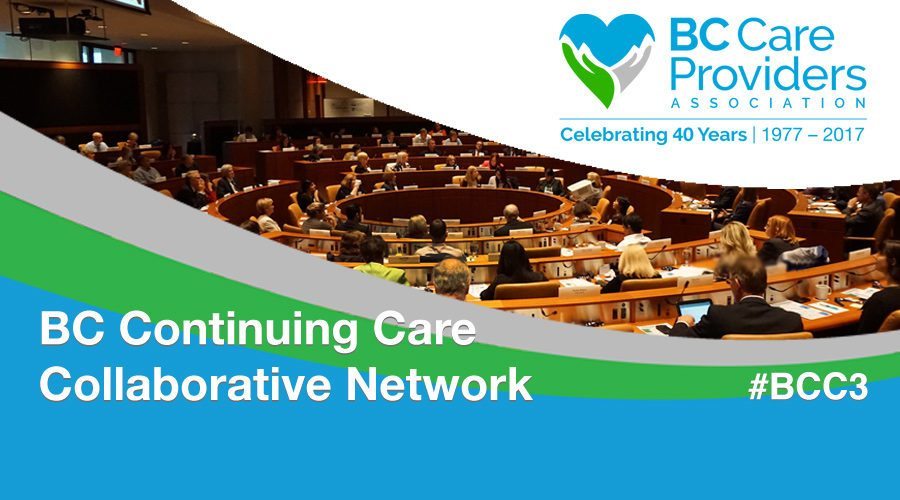 This does not mean, however, that these areas or options should be abandoned. The BCCPA will continue to work on these issues because they are critical to the health, safety and well-being of BC’s seniors. But we can’t do it alone – the BCCPA will continue to engage with a broad range of key stakeholders, including government, care providers, workers, labour unions, and seniors themselves, in order to find innovative solutions and to build consensus regarding the future of senior’s care.

We are calling this industry engagement the BC Continuing Care Collaborative Network, which we are establishing in the days ahead. It is hoped that all of those who participated in our first Collaborative, and others who were unable to join us, will continue to work together to turn good ideas into action on seniors care.

To learn more about the 2016 BC Continuing Care Collaborative program, visit here.

CBC News: ‘Let’s stop judging and labeling’ – How to create a dementia-friendly community Kicking off our celebration of 40 years!