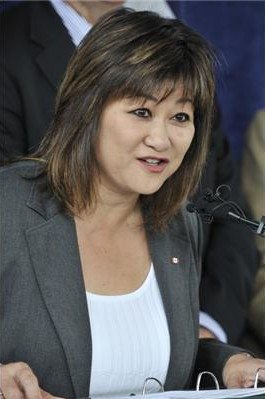 MP Wai Young announced funding of $2.5 million for a Killarney seniors centre in South Vancouver. The project has remained on hold while Vancouver attempted to source federal funding, in addition to the $2.5 million city taxpayers have already put aside, and another $1.3 million already pledged by the province. The go ahead on the project still remains uncertain while the city tries to convince the province to provide another $1.2 million to match both it and the federal government. Read the full story below or click here:

VANCOUVER – A long-awaited seniors centre for Killarney is one major step closer to construction after the federal government finally agreed to provide one-third of the cost of the $7.5 million project.

For years the project has been on hold while Vancouver tried to get federal funding, in addition to the $2.5 million city taxpayers have already put aside, and another $1.3 million already pledged by the province.

On Tuesday Vancouver South MP Wai Young announced that Ottawa will take up to $2.5 million out of the 2007 Building Canada Fund to pay for “up to one half” of the project’s costs.

But the project is still in limbo while the city tries to convince the province to provide another $1.2 million to match both it and the federal government. And two city councillors say the original cost of the centre may now have ballooned, making it harder to build to the original specifications.

Young said the money will be released to the city once a funding agreement is signed. Using a small press conference packed with seniors who attend the Killarney Community Centre, Young noted people have been wanting the centre for 15 years.

“Certainly it has been a bit of a struggle, but today we have succeeded,” she said.

The seniors applauded politely when Young made the announcement. But they gave a standing ovation to Lorna Gibbs, the president of the Southeast Seniors’ Arts & Cultural Centre Society, who had almost single-handedly fought for years to get the seniors centre.

Gibbs said Young’s announcement helps unblock the long-awaited project, and the city now has little reason to hold back on construction, she said.

“This will soon be put right,” she said. “You know, the ability to age with dignity and recreate among seniors is not a gift we should be offering to our seniors. It is a right.”

The centre is to be built on city land next to the existing Killarney Community Centre. Both Young and Coun. Raymond Louie said there is no date for the start of construction and an architect has yet to be hired.

The issue became a political football in November when the Vision Vancouver-led city council criticized the federal government for dragging its heels on the long-standing request.

Young responded by saying Mayor Gregor Robertson and Louie clearly hadn’t made it a priority request because they’d not called her recently, and she suggested the mayor, who was heading to China, “stop gallivanting off to wherever he gallivants to” and pick up the phone. She said she’d been working on getting the funding since being elected in 2011.

A federal staff member said the project was not “shovel-ready” when Ottawa approved a raft of other infrastructure funds for Vancouver last year. As as result, the project was approved recently under an exemption that will be paid for through residual funds Ottawa put aside, he said.

Louie on Tuesday said the federal announcement is welcome news and the city is working hard to convince the province to provide matching funds. He said he met in December with Justice Minister Suzanne Anton, the MLA for Vancouver-Fraserview, who he said promised to take the request to Premier Christy Clark.

However, both Louie and Park Board commissioner Melissa De Genova said the project’s cost may now have escalated due to the delay.

“The issue now is to acquire sufficient funding for the original envisioned 10,000 square foot building. We are still short,” he said. “Given the time delays for the response from the federal and provincial governments, there may be cost escalations. Now we will have to revisit those numbers and see exactly what can be built.”

He also worries that the federal money has some strings attached. “We need to understand what the restrictive parameters are in accessing these federal monies.”

de Genova said she has been told by the proponents that it may cost up to $10 million to build the centre to its original specifications, and is worried the city will cut back on things like a kitchen and elevator to cut costs. She said the city could easily fund the remaining costs out of the $268 million it has assembled from developers’ community amenity contributions.

The city says those CACs are not available for the Killarney community and are instead tied to projects elsewhere in the city.

Anton’s office said she was out of the country and not available for comment.