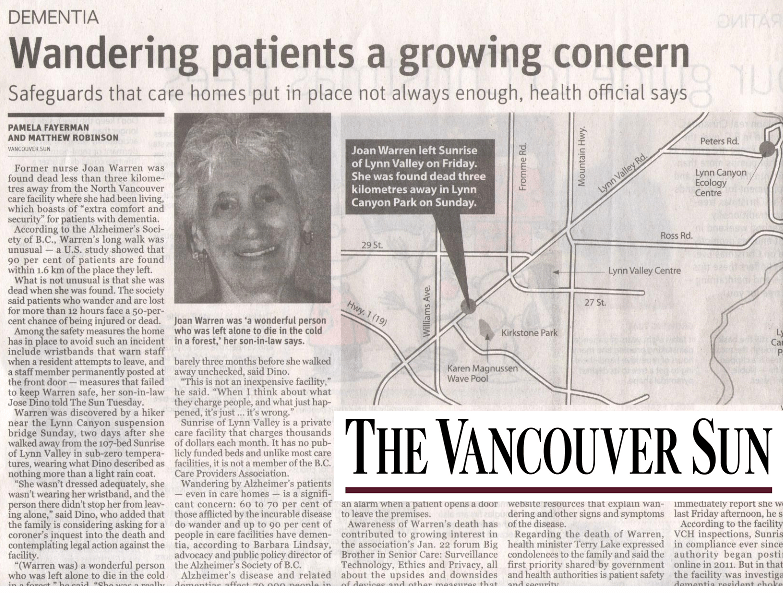 BC Care Providers Association CEO, Daniel Fontaine, is featured in the Vancouver Sun speaking about how to ensure the safety of dementia residents in care homes. Fontaine explains how wandering is a common behaviour associated with Alzheimer’s disease and other dementias, however most care homes have taken a proactive response to ensure the safety of those individuals with the illness. Read the full article below.

Former nurse Joan Warren was found dead three kilometres away from the North Vancouver care facility where she had been living, which boasts of “extra comfort and security” for patients with dementia.

According to the Alzheimer’s Society of B.C., Warren’s long walk was unusual — a U.S. study showed that 90 per cent of patients are found within 1.6 km of the place they left.

What is not unusual is that she was dead when she was found. The society said patients who wander and are lost for more than 12 hours face a 50-per-cent chance of being injured or dead.

Warren was discovered by a hiker near the Lynn Canyon suspension bridge Sunday, two days after she walked away from the 107-bed Sunrise of Lynn Valley, a private care facility that charges individuals thousands of dollars each month. It does not have any publicly funded beds and is not a member of the B.C. Care Providers Association, to which most care facilities belong.

Daniel Fontaine, CEO of the association, said although wandering is a common feature of Alzheimer’s disease, such incidents are fairly rare, especially since most facilities housing such patients have safeguards in place, such as GPS tracking devices or bracelets like the one Warren was known to have been issued. It triggers an alarm when a patient opens a door to leave the premises.

Ironically, the association is hosting a forum on Jan. 22 called Big Brother in Senior Care: Surveillance Technology, Ethics and Privacy, all about the upsides and downsides of devices and other measures that are meant to protect care facility residents.

Fontaine said the event is almost sold out, which he attributes to awareness of the Warren case. An official from the B.C. Information and Privacy Commissioner office will speak at the event, as will a labour lawyer, an expert from Paladin Security and another from the B.C. Civil Liberties Association.

Greg Ritchey, regional manager of Vancouver Coastal Health licensing, said Tuesday that although Warren had reportedly been issued a bracelet, “some residents apparently figure out how to get them off.”

The matter of wandering among Alzheimer’s patients is significant: 60 to 70 per cent of those afflicted by the incurable disease do wander and up to 90 per cent of people in care facilities have dementia, according to Barbara Lindsay, advocacy and public policy director of the Alzheimer’s Society of B.C.

Alzheimer’s disease and related dementias affect 70,000 individuals in B.C. and there are 15,000 new cases each year. Because of population aging, the number of affected individuals is expected to double by the year 2038, to 140,000.

The Alzheimer’s Society has received funding from the provincial government to beef up assistance to patients and their family members, with measures like the dementia helpline (1-800-936-6033). It also has on its website resources that explain wandering and other signs and symptoms of the disease.

The Warren death is being investigated by not only Ritchey’s department but also the B.C. Coroner and the police. Ritchey said there are about 20 incidents that must be immediately reported by care facilities, including wandering that results in a missing resident. Other reportable incidents include aggression between residents, falls, medical errors, emergency restraint incidents and choking.

In the Warren case, Sunrise did immediately report she went missing last Friday afternoon, he said.[quote name=”Daniel Fontaine – CEO, BCCPA” pull=”right”]Daniel Fontaine, CEO of the association, said although wandering is a common feature of Alzheimer’s disease, such incidents are fairly rare, especially since most facilities housing such patients have safeguards in place,[/quote]

A few years ago, the same facility faced a VCH inspection after a dementia resident choked to death. The Province newspaper reported that staff there had told family members that Eldon Mooney died of natural causes. But the daughter of the 88-year old had installed a camera in her dad’s room which showed that he had choked on his food.

A coroner found the home had been “less than forthcoming” with the facts of the death and the VCH inspection found more than 20 breaches of care involving Mooney and other patients.

Ritchey said authorities prefer to work collaboratively with facilities to ensure all regulations are being followed but when there are major infractions, replacement https://bccare.ca/wp-content/uploads/2022/08/medcare-img22.jpgistrators may be put in place or facilities may lose their licenses altogether.

Regarding the death of Warren, health minister Terry Lake expressed condolences to the family and said the first priority shared by government and health authorities is patient safety and security.

“The (government), along with the health authorities who license these residential care facilities, take this situation extremely seriously. Health authorities monitor licensed community-care facilities to ensure they comply with provincial adult care regulations, which include requirements for care plans to be in place for vulnerable patients, including those at risk of leaving facilities unannounced.”

Ritchey said since there are so many parties and “variables” involved in the investigation, the process will likely take more time. Lake said in an emailed statement that when the investigation is complete, the government will “ensure that measures identified to prevent tragic incidents such as this from occurring in the future are acted upon.”

On Jan. 22 the BCCPA will be hosting a speakers session entitled,  Big Brother in Senior Care: Surveillance Technology, Ethics and Privacy. The forum will explore the use of Surveillance technology, such as hidden video cameras and GPS tracking of residents, in long term care. To learn more about the event, or to register, please click below.