Earlier this year, Genworth Financial, Inc., released its 10th report that examines the cost of long term care across the U.S. The 2013 Cost of Care Survey covers nearly 15,000 long term care providers across all 50 states and the District of Columbia, in 437 regions nationwide. 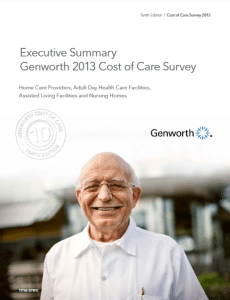 More information, including national median hourly, daily and monthly rates for home, community and facility care, is available in the executive summary and the full report.