A recent study may put to rest the stereotype of the elderly cantankerous curmudgeon.

According to Revera Inc.’s Report on Happiness, people 66 and older are more likely than other generations to equate aging with happiness.

In fact, the survey reports that people aged 66 and older are roughly twice as likely as Generation Xers (aged 33-45) and Baby Boomers (aged 46-65) to say they’re happy with their current situation in life and are optimistic about the future.

Seniors also have a more positive outlook on getting older, the report says. 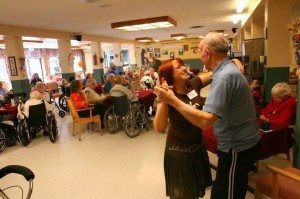 According to the study, which was conducted in August and September, people 75 and older (classified as “older seniors”) cited being comfortable in their own skin (68 per cent); being surrounded by family and friends (62 per cent); and having more free time to do the things they enjoy (61 per cent) as being the things they were looking forward to most as they aged.

Earlier research conducted by Revera showed that ageism is one of the most tolerated forms of prejudice and discrimination in Canadian society. Raising awareness of ageism and dispelling negative myths were the major reasons for conducting the research.

“What we really wanted to do with the Report on Happiness was demonstrate that older Canadians are very positive about aging, and that helps to dispel some of those common myths and stereotypes that (society has) about aging — (such as) seniors being cranky or grumpy or depressed,” Trish Barbato, Revera’s senior vice-president of home health and business development, tells the Morning Report.

Dr. Amy D’Aprix, CEO at Toronto’s International Federation on Ageing, says the report’s numbers can be used as a tool to combat ageism — an important task, given that Canada’s senior population is expected to double by 2036.

“When you look at (the report), it highlights that all those stereotypes about aging are inaccurate, yet 89 per cent of Canadians associate aging with something negative,” she says.

“We have a responsibility as people working in this field and as Canadians to spread the truth about what it means to grow older, (and) the report is one way (to do that).”

Click here to visit Revera’s Age is More website. Age is more is a campaign aimed at combatting ageism.