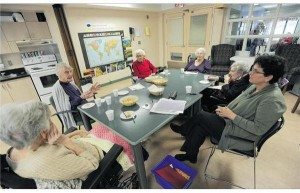 They arrive in wheelchairs. Some are hard of hearing, some tremble, others are bent by stroke, but they are here.

Bingo can wait, visitors can be rescheduled. Their mantra is “Every Thursday at a quarter to three.”

This is a writer’s group and there is work to be done: the hard work of writing, the harder work of remembering.

Member Judith Chusid puts it simply: “As a group we have forgotten more than most people have lived.”

The writers gather in a small kitchenette in the Louis Brier Home and Hospital, a Jewish intermediate care facility for seniors with complex medical needs, serving all faiths.

Turn one corner and you might happen upon a small stage where volunteers play a guitar concert to mostly empty rows of chairs. Turn another, and you will come upon corridors filled with the smell of antiseptic, the hard metal of bed rails and machinery to lift and transport bodies that no longer fully function.

In the writers’ room, baskets of stale crackers sit untouched on bare Formica tables. There is no wine, none of the strong stuff that loosens up writers in groups and gives them courage. Here there is lukewarm tea, and apple kuchen provided by a volunteer.

Chusid is tall, even in her wheelchair, with a vertical tuft of yellow hair and round blue eyes that seem, like a bird’s, to look in all directions at once. A Brown graduate, she is one of the most prolific and outspoken writers in the group.

In her poem, If I Had Known, Chusid asks, “If I had known/ that I would begin to lose the songs I loved as a child/because they are not being sung anymore/would I have bothered to learn them so carefully? … If I had known that the people I loved as a child/would have left me – every single one/would I have loved them less/so their loss would not have been as great?” Like most of the writers here, her work is achingly direct and to the point. Metaphor is for beginners.

At the head of the table, Nomi Fenson sorts through pens and scraps of paper, notes from the last meeting.

Fenson, the volunteer co-ordinator at Louis Brier, founded the writers’ club in 2004.

“The group attracts people who want to develop a feeling of intimacy, of support and encouragement,” she says.

Like all writers’ groups, this one is about getting words onto paper and discussing everything from the turn of a phrase to the deeper meaning of the act of writing itself.

The question that dogs all authors struggling against the obscurity and loneliness of an underpaid and often underappreciated craft circles this table like a spirit.

Here, where both fame and personal gain seem like preposterous pursuits and the physical challenges of simply sitting up, speaking clearly or grasping a pen can seem insurmountable, the answers are deeply considered.

At the far end of the table, Arthur Lipman, folded nearly double in his chair, lifts his head.

Lipman can no longer hold a pen to physically compose words on a page, but that’s a mere technicality. His hand rests on a thick sheaf of papers. His manuscript.

Fenson and her volunteers are here to guide, listen and transcribe when necessary.

Lipman is indeed a poet, having translated other poets and published his own in literary magazines. On the white pages before him he muses with wit and depth on love and God and aloneness, each word a hammer strike.

“I’m deaf. I’ve forgotten how to write. But I have this.”

And as long as he is making poetry there is no dying of the light.

Margaret Arteaga, who is slender, erect and composed, chooses her words carefully. “We have had some tremendous conversations. We are so isolated in our rooms. This gives us a real way to connect.”

Although she is happy to be part of the group, she, like her colleagues, is honest about what it takes. Along with a desire to write, they must bring buckets of patience to the table.

There is joyful laughter, and there are intensely emotional moments. There is homework. There is the exhausting physical act of writing. For those reading aloud, there is the difficulty of knowing which ear to shout in and who you must not shout at.

“I wouldn’t call it fun,” Arteaga quips, with the deadpan delivery of a wit at a dinner party.

Freda Koffman, her eyes as bright as her sparkling clip-on earrings, explains she was an avid letter-writer for her entire life; now, she is learning to write stories. It’s another form entirely. “I learn from other people’s writing,” she says softly. “There is a real friendship that has developed among us.”

The confidentiality among members, some of whom are Holocaust survivors, all of whom have lived volumes of joy, adventure and sorrow, is a sacred trust.

The group has self-published two books, most recently That Reminds Me – Stories and Poems by the Louis Brier Writers Club, which was presented at the 2012 Jewish Book Festival.

“I didn’t know I was a poet until last year,” says Chusid. Her speech is slowed by the stroke that keeps her in the chair, but her words are as deliberate as a manifesto.

Fenson takes a moment to read aloud from member Batia Karton’s story, Mourning Trees. Karton writes about listening to the sounds of nature in an Israeli forest as a young girl after she escaped from the Nazis, those sounds the only relief for the devastating realization she might never see her family again. In a jump cut she traverses decades and is here in Vancouver, among the “lonely trees” in Stanley Park. This time, mourning the recent loss of her son, she hears the trees “sighing and mourning” for the trees this forest lost to a storm. There is a murmur of appreciation.

“That was beautiful,” says Fenson.

“I did not write it for beauty,” Karton replies, her thickly-accented voice emphatic. Another hammer strike.

There is utter silence around the table, a silence that answers the question, Why Write.

Here, a story is written and a heart is understood.

Facebook
Twitter
LinkedIn
WhatsApp
PrevPreviousB.C. could hit ‘crisis’ with number of dementia patients
NextB.C. may cope with aging better than mostNext
Sign up for
our e-newsletter