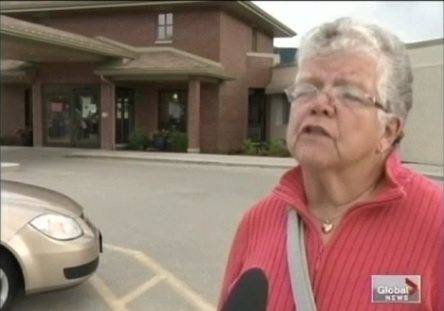 The CEO of Interior Health was on the hot seat recently in Grand Forks as local residents gathered to voice their concerns about the state of healthcare in the community.

Dr. Robert Halpenny faced one concern after the other as residents blasted Interior Health during a public forum.

“One nurse told me she was on a 24-hour shift and she actually told me that she thought she was going to kill somebody,” said Pring. “That kind of thing cannot happen in a hospital.”

Residents are deeply concerned about the town’s lack of resources and facilities. At the top of their triage list is a shortage of senior care beds in Grand Forks.

However, compounding their frustration is the fact that a sparkling new facility is sitting empty and unused.

Rod Gustafson, owner of Broadacres Care Facility, says the building has been sitting empty for at least two years.

The facility has 14 beds and is designed as a seniors’ care home.

“I’m concerned about the health care in Grand Forks. If I wasn’t, I wouldn’t have built this in the first place,” said Gustafson.

Despite being licensed for use in 2010, Interior Health decided not to award Broadacres a contract for long term seniors’ care.

Halpenny argues the building was done on an entrepreneurial basis.

“When we went out to a request for proposal (RFP) for residential care beds, the applicant did not meet the standards required for the building,” Halpenny said.

Gustafson wishes he had been told by Interior Health what more he could do to get funding.

“If there was something I needed, they should have worked along with me,” he said.

Halpenny says the facility that was awarded the RFP will fill the community’s needs.

“When this facility opens at the end of this year, we will be at the required level for this community,” Halpenny said.

The facility will not be finished until the fall and the frustration felt in the area is palpable.

“There are people waiting that could have care, who need acute care. And they are at home without care,” said concerned resident Gladys Miller.

Meanwhile, Gustafson says he will apply to have the building approved privately as an assisted living home.